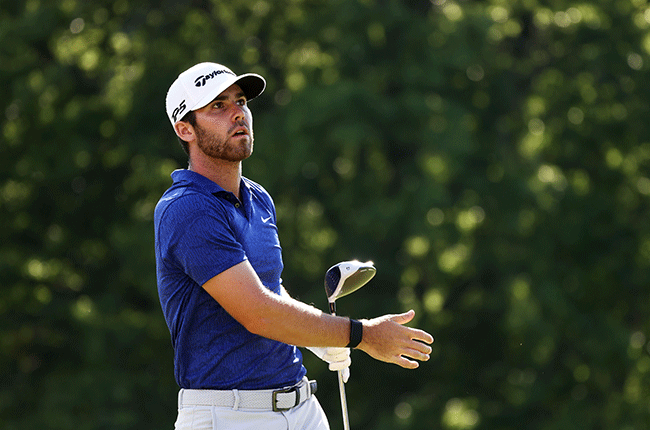 American Matthew Wolff had nine birdies in an eight-under 64 to take a three-shot lead at the Rocket Mortgage Classic, where Bryson DeChambeau bombed his way up the leaderboard.

The 21-year-old Wolff, who is seeking his second PGA Tour title, eagled the par-five 14th then seized the lead with a birdie on the next hole to reach 18-under.

Wolff closed with his ninth birdie of the round on 18 to reach 19-under 197, three shots ahead of fellow Americans DeChambeau and Ryan Armour heading into Sunday's final round at the Detroit Golf Club.

World No 10 DeChambeau and veteran Armour are tied for second after both shooting 67s to get to 16-under 200.

Wolff, who missed the cut at this tournament last year, said he is doing a better job at keeping his mistakes to a minimum by controlling his emotions.

"My mindset going into the week was to tell myself to not care," said the southern Californian. "That helps to take the pressure off my shots and keeps the rhythm going. It worked out pretty well."

Wolff's lone Tour victory so far came last year at the 3M Open in Blaine, Minnesota. The win allowed him to join Tiger Woods and Ben Crenshaw as winners of a PGA Tour event and an individual NCAA US college title in the same year.

If he wins on Sunday, Wolff would become one of the youngest two-time winners on the Tour. Tiger Woods won his first two PGA tournaments at age 20.

"I feel like I've improved," said Wolff. "You play on the Tour and you learn how consistent the players are week in and week out.

"The biggest thing is my mentality. I had a lot of expectations last year and I missed the cut at this tournament. I told myself at the start of this week that I don't care, whatever happens, happens."

DeChambeau caught fire on the back nine, rolling in four birdies on his final six holes. He finished with six birdies and his only blemish came on a frustrating par-four sixth where he made bogey.

He hasn't won since 2018 but was one of the pre-tournament favorites after gaining 20 pounds of bulk during the pandemic shutdown.

DeChambeau hammered one drive 374 yards on the par-four 13th, making it his longest of the day.

"I slowly built momentum until I hit that big bomb on 13," he said. "That was fun. I hit it up next to the green.

"I am trying to beat the house. The house isn't always going to win. If I keep playing great golf it will happen on time."

DeChambeau was upset early in his round and took out his frustrations on a cameraman after posting a bogey on the sixth, accusing the lensman of hurting his brand.

Tees off on lensman

"I understand it's his job to video me, but at the same point, I think we need to start protecting our players out here compared to showing a potential vulnerability and hurting someone's image," DeChambeau said.

"As much as we're out here performing, I think it's necessary that we have our times of privacy as well when things aren't going our way. I mean, we're in the spotlight .... For that to damage our brand like that, that's not cool in the way we act because if you actually meet me in person, I'm not too bad of a dude, I don't think."

Armour got off to quick start with three bogeys in his first four holes and was in contention throughout the round. He missed a chance at being on the top of the leaderboard when he made double bogey on the par-five 17th.

He was kicking himself for trying to do too much on the hole instead of keeping a steady rhythm. "That's not my game," Armour said.

Chris Kirk, Seamus Power, Mark Hubbard and Troy Merritt are tied for fourth at 14-under, five strokes adrift of Wolff.

Former US Open winner Webb Simpson highlights a group of five players at 13-under 203.

"It is frustrating. Not my best stuff. I didn't hit it close to the hole and hit more drives into the rough. Just one of those days," said Simpson.