In golf's return to televised competition through TaylorMade Driving Relief, the total amount raised from the skins match, relief partner donations and fan contributions as of the conclusion of the match exceeded $5.5 million.

"It was nice to feel it again. It's only - what's it been, nine weeks since The Players? It feels much longer than that," said McIlroy.

"It would have been nice to give him (Johnson) something or a high five, but obviously we can't in these times, but yeah, it's going to be different."

Johnson said: "Obviously this course is not too tough of a walk, but definitely have a little more respect for the caddies when they're - especially they're carrying a lot bigger bag than what we were carrying today. But it was a lot of fun to get back out and play with Rory, Rickie and Matt. I think we had a good time. We raised a lot of money for charity, so I'm really excited about that."

Of the $3 million pledged by UnitedHealth Group, each team began with $500 000 and played for the sum of the remaining $2 million during the match.

Both teams tied the final six holes, meaning the remaining six skins were decided by a 120-yard closest-to-the-pin competition on the par-3 17th hole, which was won by McIlroy (13 feet). Wolff’s shot landed 18 feet, 2 inches from the hole.

Fowler led all players with seven birdies during the match.

"I'm obviously excited for live sports to come back in any way, shape or form... I know the Tour has done a great job of making sure that we're in a safe spot to move forward at Colonial at the start of June, and like I said, this Covid-19 thing is bigger than all sports, but sports is also a big part of life and culture," said Fowler. 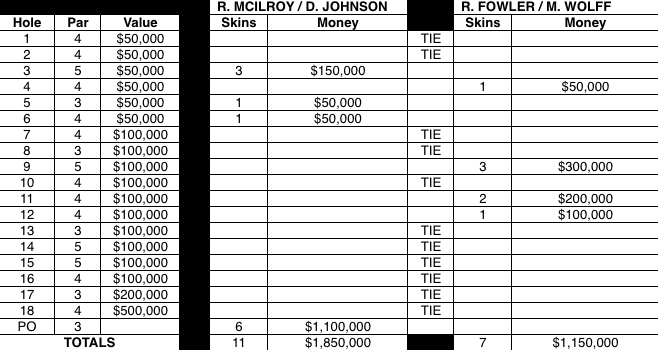 We live in a world where facts and fiction get blurred
In times of uncertainty you need journalism you can trust. For 14 free days, you can have access to a world of in-depth analyses, investigative journalism, top opinions and a range of features. Journalism strengthens democracy. Invest in the future today. Thereafter you will be billed R75 per month. You can cancel anytime and if you cancel within 14 days you won't be billed.
Subscribe to News24
Related Links
Trump says golf stars 'are all great people' despite McIlroy blast
McIlroy 'probably wouldn't' golf again with Trump
LPGA cancels Great Lakes event in July due to coronavirus
Next on Sport24
PGA Tour | JJ Spaun clings to PGA Memphis lead as Smith, Zalatoris charge