Na takes 2-shot lead into final round at Colonial 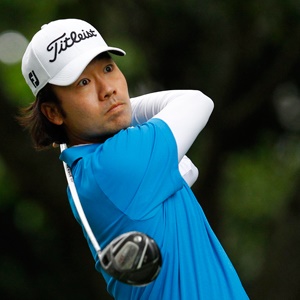 Los Angeles - Kevin Na fired a one-under par 69 on Saturday to take a two-shot lead in the PGA Tour's Charles Schwab Challenge, where three-time major winner Jordan Spieth was among those in hot pursuit.

Na, in search of a fourth PGA Tour title, started the day one off the lead of Sweden's Jonas Blixt - who slid down the leaderboard with a four-over 74.

Na seized the lead at 10-under par with back-to-back birdies at the first and second holes at Colonial Country Club.

An unlucky double-bogey at the par-five 11th cost him the lead, but he steadied himself with a birdie at 13 to finish with a nine-under par total of 201.

"After the double-bogey I hit a bad tee shot at the next hole and it looked like the wheels could fall off," Na said. "But I stayed positive, tried to put the next one in play."

The California, who carded a 62 on Friday, believes Colonial is one of a handful of courses used on the PGA Tour that gives him a good chance at a title.

"Over the years I've had some good rounds (at Colonial) and it's a golf course you don't have to overpower," he said.

"You have to keep it in play.

"From fairway in I'm a pretty good player, so I think it plays right into my game."

Hughes posted a bogey-free 65, hitting his second shot at the 18th to four feet for his fifth birdie of the day.

Pan, a month removed from his first PGA title at the Heritage in Hilton Head, South Carolina, had four birdies in his first 10 holes and briefly held the lead, but closed with back-to-back bogeys at 17 and 18 in a 68. Furyk and Spieth also carded two-under rounds while Finau signed for a one-over 71.

Pan said that after his Heritage victory he knows what he needs to do on Sunday to come away with another trophy.

"It's only a month ago, so I'm quite familiar with that," he said. "You've just got to hit really good shots."

He wasn't too discouraged by his bogey-bogey finish, noting that the narrow fairways left little room for error.

"Seventeen, you only have probably 10 yards wide fairway. If you miss it you will get blocked by a tree," he said.

Spieth, seeking his first victory since the 2017 British Open, opened his round with back-to-back birdies - rolling in putts of 30 and 21 feet as his mastery of Colonial's greens continued.

He drained another long one for a birdie at seven, although that would prove to be his last birdie of the day.

Leading scores on Saturday in the third round of the PGA Tour 'S Charles Schwab Challenge at Colonial Country Club in Fort Worth, Texas (par-70, USA unless noted):

We live in a world where facts and fiction get blurred
In times of uncertainty you need journalism you can trust. For only R75 per month, you have access to a world of in-depth analyses, investigative journalism, top opinions and a range of features. Journalism strengthens democracy. Invest in the future today.
Subscribe to News24
Related Links
Injured Wie withdraws from US Women's Open
Woods to play Memorial ahead of US Open
McIlroy confirms participation in Scottish Open
Next on Sport24
American Steele fires 61 to swipe lead at PGA Sony Open