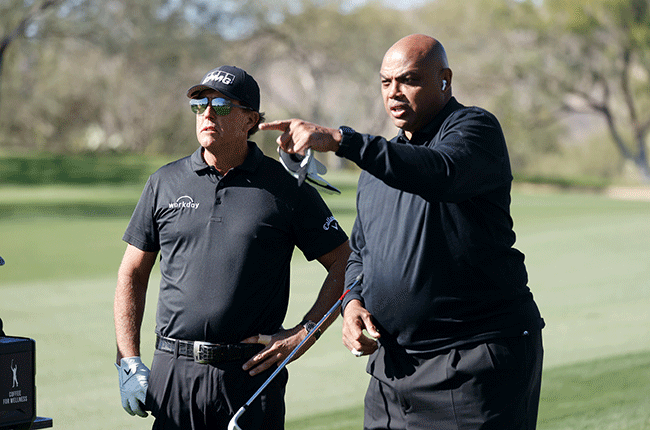 The made-for-television spectacle, "The Match: Champions for Change," was staged at Stone Canyon Golf Club in Oro Valley, Arizona, to benefit historically Black universities as well as feeding-the-needy charities.

"The man is strong and has a deft, soft touch around the green," Mickelson declared about Barkley, a 1993 NBA Most Valuable Player who is now a 57-year-old TV commentator. "He has simplified everything and calmed his mind down."

Curry, who helped re-establish a golf program at Howard University, has played in developmental tour events, while Manning has played alongside 15-time major winner Tiger Woods in an earlier charity match event.

Barkley's errant tee shots were played for laughs early on, with pre-match gifts of a safety vest, mace, snakebite kit and snacks in case he got lost seeking a woefully errant drive.

But Barkley had the last laugh, doing a respectable job off the tees and with his short game.

"I'm going to keep getting better," Barkley said. "I'm getting there."

The 18-hole modified alternate shot event began with Manning parring the opening hole to put himself and Curry ahead, but Mickelson and Barkley, shaking off the taunts, won the next four holes to seize a 3-up advantage.

A wayward drive at the seventh turned into a win for Mickelson and Barkley when Manning found a greenside bunker, but the 4-up lead lasted only until a missed Barkley putt let Curry and Manning win the eighth to pull within 3-down.

Barkley and Mickelson won the 10th to regain a 4-up edge, but Mickelson's tee shot at 11 found desert bushes right, and they needed five to reach the green as Curry and Manning pulled within three with seven holes to play.

A strong Barkley chip from greenside rough enabled the Mickelson duo to capture the 12th hole with a double bogey, as Manning and Curry struggled in the desert sand.

After halving the 13th and 14th holes to go dormie, Mickelson and Barkley won at the par-5 15th.

Manning holed an eight-foot birdie putt, but Mickelson topped him from six feet to halve the hole and claim the match.

We live in a world where facts and fiction get blurred
In times of uncertainty you need journalism you can trust. For only R75 per month, you have access to a world of in-depth analyses, investigative journalism, top opinions and a range of features. Journalism strengthens democracy. Invest in the future today.
Subscribe to News24
Related Links
Meronk powers to Leopard Creek lead with SA's Schaper close by
SA caddie helps Frenchman Roussel share Alfred Dunhill Championship lead
Golf rankings: Top 20 - SA
Next on Sport24
See-saw back nine carries Swafford to second PGA La Quinta win