SA's Dylan Frittelli in the hunt at PGA Tour event 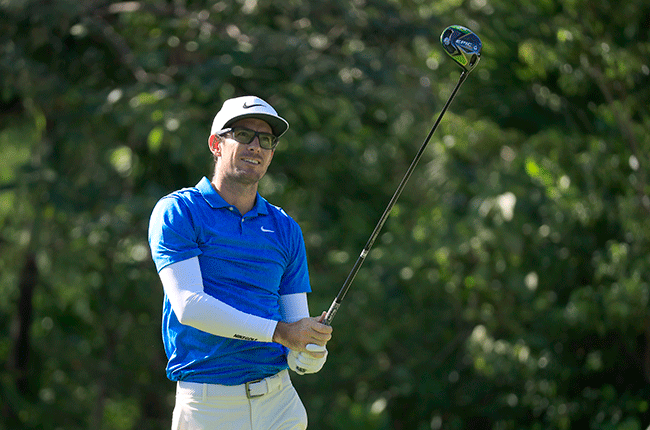 Ian Poulter fired seven birdies, including a 31-footer at the 17th, to share the first-round lead at the RBC Heritage on Thursday at seven-under par 74.

England's Poulter and American Mark Hubbard set the early pace at Harbour Town Golf Links in Hilton Head Island, South Carolina, and a raft of afternoon challengers failed to get past them.

Plenty came close however, with seven players tied on six-under 65 and another six on five-under par 66.

"Any time you shoot seven-under par around this golf course, it's obviously a pretty solid day," said Poulter, who won the last of his three US PGA Tour titles at the 2018 Houston Open.

"It's very important being bogey-free. It's a fiddly, testing, tricky golf course," Poulter added of the par-71 layout.

Poulter said he needed to improve off the tee, but his solid iron play included a 213-yard five-iron to five feet for a birdie at 18, and he didn't miss a putt from within 10 feet.

The highlight for Hubbard, whose best PGA Tour finish was a tie for second at the Houston Open earlier this season, was a 10-foot eagle on the second hole.

Three-time major winner Jordan Spieth was the unlikely leader of the group on five-under par 66, overcoming a triple-bogey at his third hole, the 12th, with eight birdies - seven of them on his second nine.

"It's not a great feeling," Spieth said of finding himself three over through three holes after going right off the tee at 12.

His ball hit a tree and ended up out of bounds, but the American was able to regroup, stringing together six birdies in a row from the second through the seventh holes before capping his round with a birdie at nine.

Former world number one Brooks Koepka and South African veteran Ernie Els were among another big bunch on 67.

It was a "little bit of a struggle" for world number one Rory McIlroy, whose one-over 72 left him with work to do to make the cut.

McIlroy, coming off a disappointing 74 in the final round at the Charles Schwab Challenge, said there wasn't much change from Sunday's round at Colonial.

"Just missing tee-shots," the Northern Ireland star said, "Didn't get it in play enough to give myself looks at hitting it close into greens."

The tournament is the second since the PGA Tour resumed play after a 91-day hiatus due to the coronavirus pandemic.

Poulter gave his Twitter followers an inside glimpse of some of the tour's health protocols when he posted a video of himself undergoing a nasal swab Covid-19 test on Wednesday - calling it a "bizarre sensation."

Poulter tested negative, as have all players, caddies and officials for two straight weeks.

"It's a great start," Poulter said of the negative tests. "I don't think the PGA Tour would have expected that.

"They definitely would have expected a few people, certainly from as far and wide as people are traveling to come in and play golf."

Have you ever wondered what Corona Virus testing in sport looks like...bet you don’t want to know what it feels like! pic.twitter.com/GUCxdn7oiI

We live in a world where facts and fiction get blurred
In times of uncertainty you need journalism you can trust. For only R75 per month, you have access to a world of in-depth analyses, investigative journalism, top opinions and a range of features. Journalism strengthens democracy. Invest in the future today.
Subscribe to News24
Related Links
PGA Tour players weigh in on Bryson DeChambeau's new look
PGA of South Africa tees off new vision for PGA Championship
Rory McIlroy dismisses European players' ranking complaints
Next on Sport24
Hot start in desert lifts Cantlay to share of PGA Tour lead