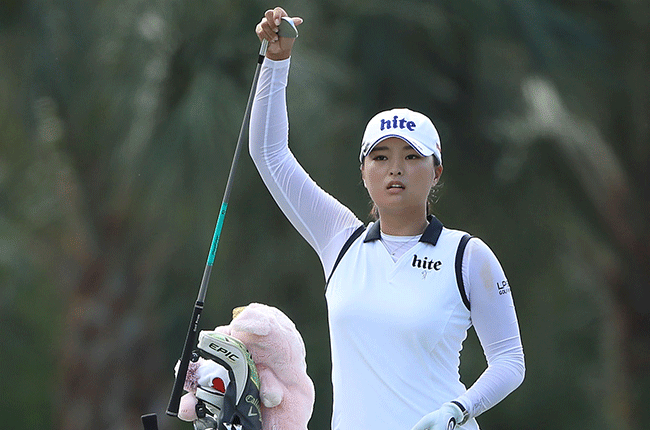 Ko, who was playing just her fourth LPGA event of the pandemic-disrupted season, had only squeezed into the elite field with a tie for second on Monday at the US Women's Open.

But the 25-year-old South Korean made the most of her opportunity, firing seven birdies in her six-under par 66 at Tiburon Golf Club in Naples, Florida.

She rolled in a final birdie at the 72nd hole for an 18-under total of 270 and a convincing win over Kim and Australian Hannah Green, who shared second on 275.

It was the payoff for the lonely weeks since she returned to the United States in November, leaving family and friends back in South Korea.

"I just wanted to play CME," she said of her determination to make the season finale sponsored by CME Group.

"Last week I had really good round and then I finished top two, so and then I can play here."

Kim, whose two victories since LPGA play resumed after a pandemic shutdown included a first major at the Women's PGA Championship, had come into the day with a one-stroke lead.

Unable to build momentum in an even par round that featured three bogeys and three birdies, her share of second was enough to overtake veteran South Korean compatriot Park In-bee for Player of the Year honours under the points system used by the LPGA.

Park finished in a tie for 35th.

Green grabbed her share of second with a bogey-free five-under par 67.

"Really nice," said Green, who celebrated her 24th birthday on Sunday. "Super stoked to have a great round on my birthday."

It was a good day, too, for her playing partners Mina Harigae and Lydia Ko. Harigae carded a bogey free 68 for solo fourth on 276.

New Zealand's former world number one Ko had three birdies without a bogey in a 69 for 277, tied for fifth with American Lexi Thompson (70).

"I think we all definitely fed off each other," Green said. "Lydia holed a couple long putts early in the round and Mina did the same, and then I finally holed some putts, too.

"It really makes a difference when you're playing with people that are playing well."

Ko and Kim played together in the final group, but the duel between the world's top two turned into a lopsided affair.

Ko wasted no time in erasing her overnight deficit with a birdie at the opening hole.

She was 13-under through nine after a birdie at the sixth and a bogey at the ninth - tied for the lead with Kim who was even on the front with one birdie and one bogey.

Ko pulled away with three birdies in a row at the 12th, 13th and 14th and added two more for good measure at 16 and 18 for her seventh career LPGA win.

"We are close, so, yeah, it was tough," Ko said of again playing alongside good friend Kim.

"But it was competition ... so I say a little sorry to Sei-young. She played good, I played a little better."

We live in a world where facts and fiction get blurred
In times of uncertainty you need journalism you can trust. For 14 free days, you can have access to a world of in-depth analyses, investigative journalism, top opinions and a range of features. Journalism strengthens democracy. Invest in the future today. Thereafter you will be billed R75 per month. You can cancel anytime and if you cancel within 14 days you won't be billed.
Subscribe to News24
Related Links
Woods and son finish 5 behind triumphant Team Thomas in family golf event
WATCH | Charlie's eagle for Team Woods wows at PNC Championship
LPGA announces 34-event 2021 schedule
Next on Sport24
PGA Tour | McIlroy enjoys 'US Open rehab' to lead Travelers