Saint-Quentin-en-Yvelines - Five players to watch at the 42nd Ryder Cup which starts at Le Golf National on Friday.

The 14-time major champion snapped a five-year win drought Sunday by winning the Tour Championship for his 80th career PGA title, two shy of Sam Snead's all-time record. Fans flocked around him to get a glimpse of his historic winning putt on the 18th green. The outpouring of emotion from fans nearly brought Woods to tears. The 42-year-old American's presence in France for the first time since a teen amateur in 1994 should attract huge crowds to his every move.

Any shot could be something special. Could make a horrible tee shot followed by an amazing recovery or simply produce shotmaking for the ages. It comes after four back operations since 2014, the last a spinal fusion. Woods feared he might endure a life of back pain, struggling to even play with his children.

Instead, he's a threat to win more majors. He has been a Ryder Cup winner only once, in 1999, in seven tries but has become a key figure on the US squad for leadership, advice and strategy. Was to have been an assistant captain before being picked to play. Former world No 1 is now ranked 13th. The 38-year-old Englishman leads the European squad after one of the best periods of his career. He spent two weeks as world No 1 for the first time and then captured the $10 million PGA FedEx Cup playoff prize.

Rose captured his only major title at the 2013 US Open but won the gold medal in golf's return to the Olympic line-up in Rio in 2016. He shared second at this year's Open, his best-ever result in the event, and was runner-up at the Masters in 2015 behind Jordan Spieth and in 2017, losing to Sergio Garcia in a sudden-death playoff. Scored four points in Europe's 2014 Ryder Cup win. 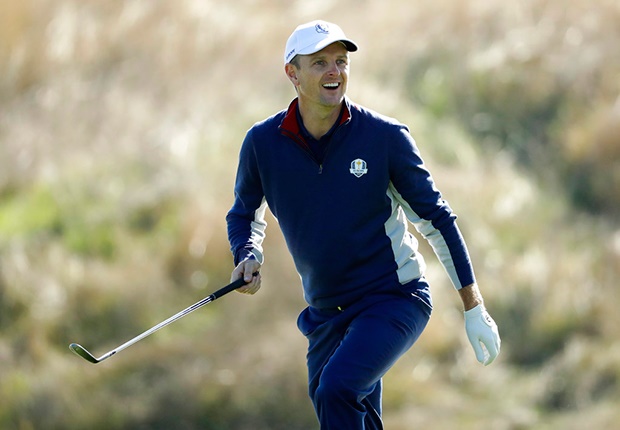 The four-time major champion from Northern Ireland brings an emotional fire to the European side. Taking the taunts from fans in 2016 at Hazeltine, he cupped his hand to his ears as if to say, 'bring it on'.

Any match against Tiger or a rematch of his singles classic at Hazeltine against Patrick Reed figures to be gripping. At 29, sixth-ranked McIlroy has enjoyed an exceptional career. After squandering a lead to lose the 2011 Masters, he bounced back to win the next major, the 2011 US Open, and has added the 2012 and 2014 PGA Championships and 2014 Open titles to his trophy haul.

Needs only a Masters green jacket to complete a career Grand Slam, a feat only five players have accomplished. The self-styled "Captain America" shushed crowds at Gleneagles in his Cup debut after making long putts and enjoying a solid run paired with Jordan Spieth.

Could be the man the European fans love to hate. Has backed up his big talk about being a top-five player by winning the Masters in April for his first major title, although he still hasn't reached his lofty ranking boast.

Reed, now ranked 15th, figures to draw chants, songs and heckles from the European crowd and he just might thrive on every one of them. Europe's talisman. The 42-year-old Englishman tweets: "I love team @RyderCupEurope more than you can imagine." He was a captain's pick in 2012 when he won all four of his matches and sparked Europe's amazing comeback victory in the Miracle at Medinah.

Six years later he's a wildcard pick again and is expected to bring lightning once more. He'll give Europe experience, leadership and electricity as needed. A Cup winner in four of his five appearances, Poulter also had four points in a losing cause in 2008. As he also tweeted: "Dig deeper at times it's amazing what happens."