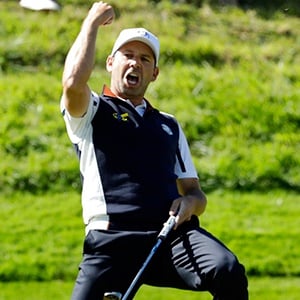 Saint-Quentin-en-Yvelines - Ryder Cup veterans Sergio Garcia and Ian Poulter starred as Europe claimed a history-making foursomes whitewash in a stunning fightback to seize a 5-3 lead over the United States on Friday.

Trailing by two points after the opening-morning fourballs at Le Golf National, home captain Thomas Bjorn brought wildcard picks Poulter, Garcia and Henrik Stenson into the action and the decision paid off in style.

Europe roared back at the Americans to the delight of raucous crowds at the first Ryder Cup to be played in France.

"Those guys that sat out this morning, I'm very proud of what they did because they came out and showed quality and class in what they did," said Dane Bjorn.

"This was obviously a wonderful afternoon, disappointing morning, but there's a long way to go in this."

US skipper Jim Furyk left out Tiger Woods and Patrick Reed after their defeat by Francesco Molinari and Tommy Fleetwood got Europe on the board, and his players totally lost the momentum they had built up earlier in the day.

It was the first foursomes clean sweep for the hosts in Ryder Cup history.

The States arrived at Le Golf National with a star-studded outfit featuring nine major champions as they look for a first win on European soil since 1993, but they were left shell-shocked after falling apart on the picturesque Albatros course.

Stenson and Rose reprised their successful partnership of Ryder Cups gone by to see off Rickie Fowler and Dustin Johnson 3 and 2, while Garcia teamed up with Swedish rookie Alex Noren to crush Phil Mickelson and Bryson DeChambeau 5 and 4.

The experienced duo of Poulter and four-time major winner Rory McIlroy battled back from 2-down to beat Bubba Watson and Webb Simpson 4 and 2.

Molinari and Fleetwood grabbed their second win of the day with a 5 and 4 thumping of Jordan Spieth and Justin Thomas, as all the American pairings finished their rounds over par.

All four matches saw dominant triumphs for Europe, and finished within an hour of each other.

FedEx Cup winner Rose - who had slumped to defeat by Brooks Koepka and Tony Finau earlier in the day alongside Jon Rahm - put in a solid performance with Stenson which saw them storm 5-up after 11 holes and leave Johnson and Fowler with too much to do.

Rose and Stenson have now won five of seven Ryder Cup matches as a partnership.

"Henrik and I have had great vibes in this event," said Englishman Rose.

McIlroy had struggled badly in the fourballs, failing to make a birdie or win a hole as he and Danish debutant Thorbjorn Olesen lost to Johnson and Fowler.

But, despite taking a two-hole advantage after three, Simpson and Watson reeled off five bogeys in just six holes to throw the match away.

The talismanic Poulter all but ended the encounter as a contest with a dead-eyed birdie putt on the 13th, after an incredible recovery shot from McIlroy out of thick rough.

"It's been a long time since I played a Ryder Cup," said Poulter, who was a vice-captain in the loss at Hazeltine in 2016. "Four years is a long wait but the second I got going this morning, I felt good."

Simpson admitted the 13th was a turning point, saying: "The 13th hole was kind of the flipped hole. We thought we were going to get one there. It's the way it goes."

The 38-year-old Garcia had been a controversial pick by Bjorn after a poor season, but he and Noren raced into a 7-up lead over the misfiring Mickelson and DeChambeau on the front nine.

Former Masters champion Garcia has won 23.5 points since making his Ryder Cup debut as a teenager in 1999, and needs just two more to pass all-time record-holder Nick Faldo's mark of 25, but he was quick to praise Noren's performance in his first Ryder Cup match.

"I think Alex was a rock," said the Spaniard. "I helped him a little bit here and there and it was great to get a point."

Spieth and Thomas were magnificent in their thrilling 1-up fourballs win over Paul Casey and Tyrrell Hatton, but off-colour against the excellent Molinari and Fleetwood.

Open champion Molinari, as he did in the win over Woods and Reed, made the winning putt.

"I think we just combine really well," said the Italian. "But you know, the boys that went out early this afternoon made an unbelievable job."

Collated results on Friday from the 42nd Ryder Cup between Europe and the United States at Le Golf National:

We live in a world where facts and fiction get blurred
In times of uncertainty you need journalism you can trust. For only R75 per month, you have access to a world of in-depth analyses, investigative journalism, top opinions and a range of features. Journalism strengthens democracy. Invest in the future today.
Subscribe to News24
Related Links
'Team most important', insists Woods after loss
Koepka injures fan with errant tee shot at Ryder Cup
Next on Sport24
Garcia, Lowry, Poulter named as Europe's Ryder Cup wild cards