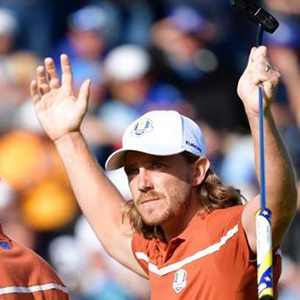 Saint-Quentin-en-Yvelines - Tommy Fleetwood and Francesco Molinari made history on Saturday by becoming the first European pairing to rack up four wins from four at the Ryder Cup.

Fleetwood and Molinari have been inspirational over the first two days to help Thomas Bjorn's hosts open up a commanding 10-6 lead over the United States at Le Golf National.

The duo saved possibly their best performance for last, crushing Tiger Woods and Bryson DeChambeau 5 and 4 in the foursomes with a clinic of how to win at matchplay golf.

Having already beaten Woods twice in the fourballs when the 14-time major champion was playing with Patrick Reed, Fleetwood and Molinari produced a bogey-free round with four birdies to achieve a feat that no other from their continent had done before.

"It's very special. And just glad that, you know, we've done our job for the team," said Englishman Fleetwood.

"And (the) team's doing really well at the moment. But for us, we've had a great time."

The 27-year-old Fleetwood also became the first European rookie to win his opening four matches in the event, having levelled Sergio Garcia's mark of three earlier in the day with a 4 and 3 fourball triumph over Woods and Reed.

Both members of the 'Moliwood' pairing will now head into Sunday's singles with a chance of becoming the first European to claim a perfect five points from five Ryder Cup matches, and the first from either side since American Larry Nelson in 1979.

But British Open champion Molinari is just focusing on getting Europe over the line as they look to regain the trophy and notch a sixth straight triumph on home soil.

"We came here to do a job, and it wasn't to go in the records books or anything like that, it's about the team, it's about getting to 14 1/2," insisted the Italian.

"You saw them today. They're obviously 12 great players."

It has been the best season of Molinari's career, featuring his first major title, his maiden tournament win on the US PGA Tour, and the European Tour's showpiece BMW PGA Championship.

But the world number five said that nothing, even winning at Carnoustie in July, could compare to winning four successive Ryder Cup matches.

The 35-year-old has now also played Woods five times in Ryder Cups - winning three, losing one and halving one after two previous singles clashes with the former world number one in 2010 and 2012.

Fleetwood and Molinari have been extremely complimentary of each other all week, with their strong relationship vital to their dominant performances.

"He's one of my best friends, not just on Tour but in life," smiled Fleetwood.

Even the vanquished Woods praised the Europeans, saying: "The three matches we played, they never missed a putt inside ten, 12 feet. That's hard to do."