South African Ashleigh Buhai took a firm grip on the Women's British Open on Saturday with an impressive third round 64 at Muirfield to leave her dreaming of emulating childhood hero Ernie Els.

On 14 under par, Buhai led by five shots from halfway leader Chun In-gee (70) and Japan's Hinako Shibuno (66). Park In-bee and Madelene Sagstrom were tied for fourth on seven under.

The 33-year-old Buhai has never scaled the same heights as a professional as she did as a teenage phenomenon.

Known then as Ashleigh Simon, she won the first of three South African Amateur Championships at the tender age of 14.

She has won three times on the Ladies' European Tour and has two South African Women's Opens but is still waiting for the breakthrough on the LPGA Tour.

One behind Chun at halfway after rounds of 70 and 65, she was in inspired form in the brutal cool and windy conditions.

She made eight birdies and, for the second day in a row, her only dropped shot came at the 18th.

"I think it is my best ever round," said the delighted Buhai.

"I think it is going to be another tough day tomorrow but, hopefully, the lead will be good enough.

"But, in these conditions, anything can happen but I love links golf. This has always been my favourite tournament of the year. I played great all day. Hit it close and the chip in for birdie at 17 was a bonus. 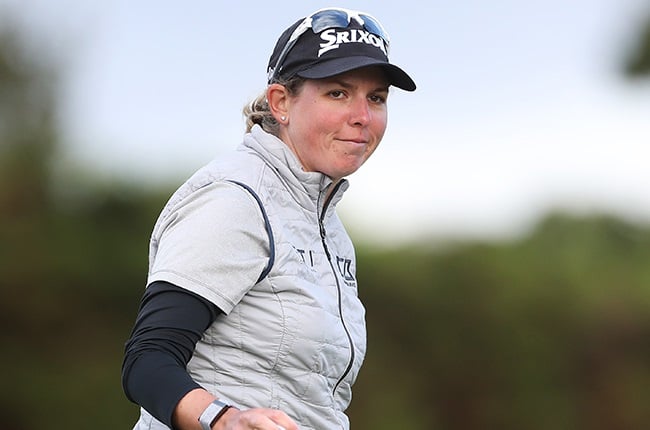 "My poorest shot was the five wood second at 18 that led to a bogey. But I'll take it."

Els won the 2002 Open at Muirfield, and it would be a dream fulfilled for Buhai to follow in his footsteps.

"I love Ernie," she said. "He was the player I looked up to when I was young and it had crossed my mind that it would make it extra special to win here. Now we both live in Florida, which is fun."

Shibuno led after a first round 65 and is delighted to have the prospect of playing with Buhai in the final round.

"I can keep an eye on what she is doing. I want to win again," said the player who lifted the title at Woburn in 2019 when Buhai finished fifth.

Chun never quite found the vital spark, but three birdies kept her in the hunt for a second major of the season to set alongside the Women's PGA Championship.

Park played with Buhai and the seven-time major champion was mightily impressed. But the Korean has not given up hope of a second British Open.

"The weather was even worse when I won at Turnberry (in 2015) and I shot seven under in the last round," she recalled. "I'll need another round like that tomorrow.

"Ashleigh has a huge lead and played exceptionally today, but anything can happen. Three or four shots can slip away in a few holes."

American Rose Zhang was the only amateur to survive the cut and the Cutis Cup star shot an impressive 70 to stand on one under par.

The 19-year-old is set to pick up the amateur award, the Smyth Salver.