Harding eases ahead in rain-delayed 3rd round of SA Open 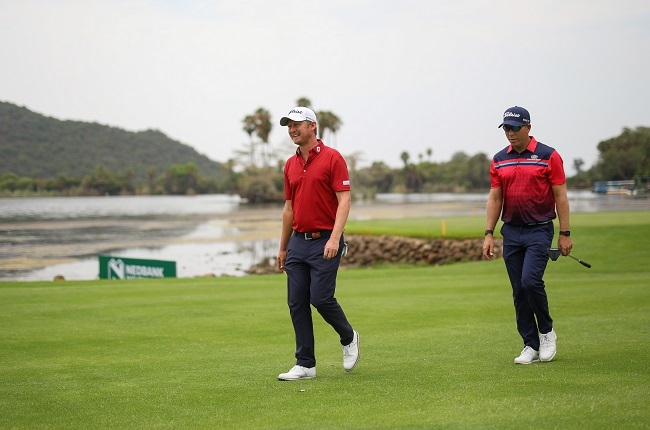 The predicted storms rolled in on Saturday at the Gary Player Country Club and stopped Justin Harding’s charge on ‘moving day’ in its tracks – but not before he had taken a one-stroke lead with five holes to play in the third round of the South African Open Championship.

Harding made three birdies on the front nine, while halfway leader Oliver Bekker couldn’t buy a putt, and, although Harding dropped a shot on the 10th, Bekker made bogey on nine and 13 to surrender the lead to his good friend who was on 11-under-par.

Bekker was in a share of second with Daniel van Tonder on 10-under through 14. Hennie du Plessis was on nine-under in fourth, and Neil Schietekat in fifth on eight-under.

With his playing partners Bekker and Schietekat seemingly feeling the pressure of trying to win the second-oldest open championship in golf, Harding was making light work of his task as he found fairways consistently off the tees, hit accurate shots in to the greens and looked more likely than the others to make putts.

And, indeed, it was lower down on the leaderboard where the action seemed to be happening, as Jovan Rebula, Rupert Kaminski, Dean Burmester, Brandon Stone and CJ du Plessis all signed for six-under-par 66s.

There were also three 67s already in the clubhouse when the storms hit, and Bekker would have been grateful for the opportunity to regroup and get back into action with renewed focus and determination when play resumes early on Sunday morning.

But he will be up against an equally determined Harding, and a charging Van Tonder. Schietekat and Du Plessis, too, will grasp the opportunity to rededicate themselves to the cause.

In the race for the Freddie Tait Cup for the leading amateur, Yurav Premlall has made the most of qualifying his way into the field, and, at one-under for the round through 15 holes and at six-under for the tournament, has a handy lead over Werner Deyzel who is in two-under after a level-par 72.

Round three will be finished early on Sunday morning, and round four will start as soon as that is complete.

We live in a world where facts and fiction get blurred
In times of uncertainty you need journalism you can trust. For only R75 per month, you have access to a world of in-depth analyses, investigative journalism, top opinions and a range of features. Journalism strengthens democracy. Invest in the future today.
Subscribe to News24
Next on Sport24
Oliver Bekker dominates to take halfway lead in SA Open