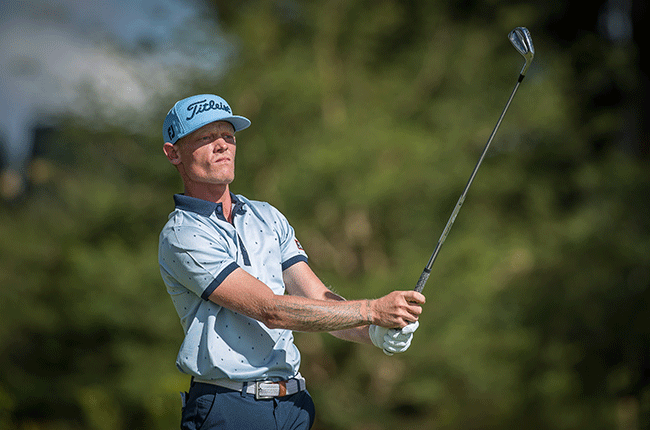 MJ Viljoen will take a one-stroke lead into the weekend of a Serengeti Pro-Am Invitational that has tested every element of the Sunshine Tour professionals' games in their third round on Friday.

Viljoen posted a round of three-under-par 51 on Whistling Thorn to lead the field by a single stroke on 11-under par overall.

His nearest challenger is Jaco Prinsloo, who is still very much in contention for a second victory in three tournaments after his round of one-under 53 on Friday.

Riekus Nortje heads into the weekend in third place on nine under par following his two-under-par 52.

The first two rounds of this unique five-round tournament were played on Serengeti's main Jack Nicklaus Signature Design Championship course on Tuesday and Wednesday. The pros then had a day off on Thursday, followed by Friday's third round on Whistling Thorn and which coincided with the first round of the pro-am team competition.

The team competition is currently led by the Fairway Ninjas team of Sunshine Tour professionals Riekus Nortje and Ruan Korb and their amateur partners Jacques Nel and Dries van Shalkwyk who are three strokes clear of the field on 20-under par.

Sunday's 'fifth round' will be the final round of the pro-am.

"It's certainly a different format, but it doesn's bother me. It actually felt good to have an off day on Thursday. It's been a busy run of tournaments for us," said Viljoen.

Headed into Friday's round, Viljoen was wary of a Whistling Thorn course that is by no means a par-three pushover.

"The par three course is quite a difficult course that demands great golf shots, so I wasn't too aggressive out there because it can bite you pretty quickly."

Viljoen is looking forward to a weekend on Serengeti's championship course, which he knows equally well and which he also respects.

"I was a member here from 2010 to 2014 and I still play here as often as I can, so I know the layout of the course. I'm just going to enjoy myself out there and take my chances when they come."

Viljoen has been pushing for a victory after finishing 16th in the Kit Kat Group Pro-Am and then fourth in the recent Gauteng Championship.

"I think in cases where I've led rounds I've handled that pretty well over the last two years. I don't plan to change anything over the weekend. I firmly believe you win a tournament on the back nine on the last day, and I know I've worked hard for these tournaments and can rely on my game and just trust myself when it counts."