It was possibly the most perfect way MJ Viljoen could have celebrated Heritage Day.

For this golfer from Bloemfontein, it's already a bonus that his girlfriend's birthday is on "Braai Day".

And then on Thursday he went one better and maintained his place at the top of the leaderboard in the Vodacom Championship Unlocked.

Viljoen added a 67 to his opening 64 at ERPM Golf Club and heads the field on 13 under par going into Friday’s final round of this Rise-Up Series tournament.

His nearest challenger is Jake Redman on 11 under par following a 67. And he has two former Rise-Up Series champions chasing him as Darren Fichardt heads into the final round just three strokes off the lead, while Daniel van Tonder is five strokes back.

But Viljoen said he came into this tournament with the right mindset of aiming to win and not just compete, and it seems to be paying off for him.

"It was nice to follow up my 64 with a good round. To back up that 64 with a round of five under is nice," he said. "Things got a little bit slow on the back nine and I lost a bit of focus on the last five holes, which is where I made my only bogey of the day. But I'm very happy with the result."

Viljoen is chasing his second victory on the Sunshine Tour after winning in 2017. But this will be the first time that he heads into a final round as the tournament leader.

"It does make a difference to have that experience of winning going into the last round, but this is the first time where I'm leading so that will be new for me. And I'm going to try and learn from it and I just hope I play well."

There was no chance Viljoen was going to let his focus slip and relax with a braai on Heritage Day. That will have to wait. "The golf course takes quite a bit out of me. But maybe I'll celebrate with a nice braai on Friday."

We live in a world where facts and fiction get blurred
In times of uncertainty you need journalism you can trust. For only R75 per month, you have access to a world of in-depth analyses, investigative journalism, top opinions and a range of features. Journalism strengthens democracy. Invest in the future today.
Subscribe to News24
Related Links
SA's Dean Burmester shares lead at Irish Open
MJ Viljoen flying high in Vodacom Championship Unlocked
Can Augusta cope with the 'Incredible Bulk'? Golf talking points
Next on Sport24
MJ Viljoen flying high in Vodacom Championship Unlocked 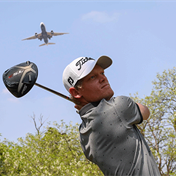