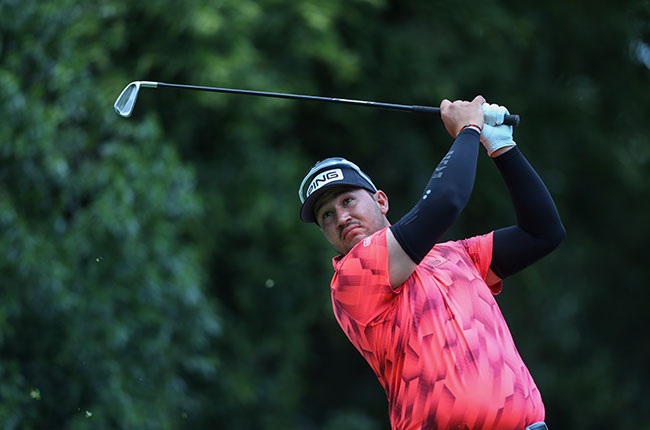 South African golfer Thriston Lawrence shared the lead after the opening round of the Joburg Open before play was suspended due to dangerous weather on Thursday.

Lawrence was on six-under-par with one hole to play before the siren blew and co-leads with Spaniard Angel Hidalgo at a windy Randpark Golf Club.

The Joburg Open made history as it became the DP World Tour's (formerly the European Tour's) first event with the field's highest-ranked golfer Dean Burmester honoured with hitting the opening tee shot.

Lawrence made three birdies and two eagles in his 17 holes with the South African set to resume his round at 06:30 on Friday.

Trailing the duo by one is England's Ashley Chesters, who carded six birdies and a bogey to complete his first round at five-under.

In his opening round, South African star golfer Dylan Frittelli is two shots off the lead after carding a 4-under par 67.

Frittelli, who is a regular on the PGA Tour, had to battle jetlag in the build-up to the Joburg Open after arriving in South Africa on Monday.

The 32-year-old is looking to take a more aggressive approach to this year's tournament.

"Overall, I'm happy. Anything under a par score in this wind," said Frittelli.

"In a lot of these Sunshine Tour events, I've been a little bit scared and tried to just keep it in play, but now I'm just going to go at it full tilt and see where it ends up after 72 holes."

Frittelli is one of the seven golfers currently tied for fourth alongside South Africa's Hennie du Plessis.

Du Plessis carded five birdies and a bogey to sit on 4-under and stated that he was pleased with his performance.

"It was quite windy out there so I'm very happy with my ball-striking," said Du Plessis after his round.

"Every tournament I play right now is a good start. It's amazing to be back and putt on these greens... I'm just going to keep going on and put in a good week."

South Africa's Zander Lombard is on 4-under par and still has one hole to play after the weather interrupted his opening round.

South African golfer JC Ritchie made the first hole-in-one of the new season when he aced the par-three 17th as he finished on one-over-par 72.

Ritchie, however, was unlucky to miss out on the Jaguar on offer for a hole-in-one, which is only available on the weekend of this tournament.

Meanwhile, Burmester posted an opening round of 72 to sit on one-over par.

Featured Round 2 pairings of Joburg Open:

We live in a world where facts and fiction get blurred
In times of uncertainty you need journalism you can trust. For only R75 per month, you have access to a world of in-depth analyses, investigative journalism, top opinions and a range of features. Journalism strengthens democracy. Invest in the future today.
Subscribe to News24
Next on Sport24
Sunshine Tour 2021 schedule