Venter’s 62 catapults him to top of Centurion leaderboard 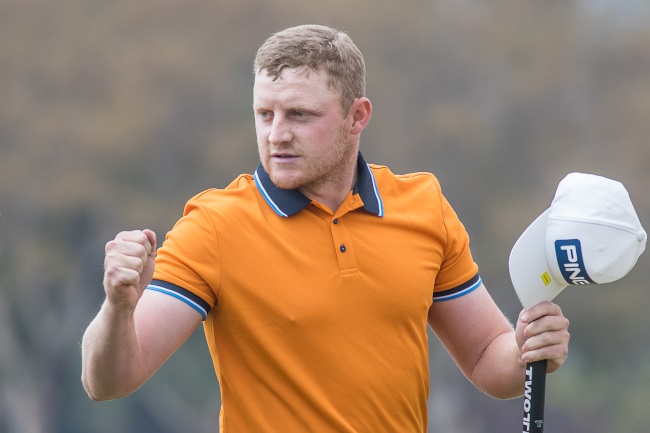 But for a double-bogey, Albert Venter had a real chance of firing a 59 on Thursday, but he was more than pleased with his 10-under-par 62 which gave him the 36-hole lead in the Sunshine Tour Invitational at Centurion Country Club.

With 12 birdies to counter the double-bogey six on the 11th, his 62 took him to 16-under for the tournament, two clear of Jaco van Zyl who signed for a seven-under 65, and three ahead of Jacques Kruyswijk, whose eight-under 64 had him in third on 13-under.

“I thought 59 was definitely in the equation after I made 30 on the front nine, especially considering I missed quite a few short putts on the front nine,” said Venter. “Based on that, it was always going to be on, Unfortunately, I got an unlucky bounce on 11 and finished behind a rock. I had to take an unplayable and that ended up giving me a double-bogey.”

He started his round with a birdie on the first, and then he picked up three in a row from the fourth to the sixth. Another two in a row on eight and nine saw him turn in six-under 30. The double-bogey on 11 was sandwiched between birdies on 10, 12 and 13, and he picked up three more on the way home on 15, 17 and 18.

“I got off to a pretty decent start,” he said. “I was hitting the ball really well and the putter’s been working quite nicely for the last two days. I was just trying to get myself into good positions to make putts and I pulled that off today.”

Van Zyl, who has won before at Centurion on the Sunshine Tour, had a bogey-free round with an eagle and five birdies, and Kruyswijk, home from the European Tour, had eight birdies on his card without dropping a shot.

The first-round leader Michael Palmer had two bogeys in his second round of four-under-par 68, and, at 11-under for the tournament, is in a share of fourth with CJ du Plessis going into the final round.

Venter’s form has been trending in the right direction, despite missing the cut in the last Sunshine Tour tournament at Sishen, with a share of fourth in the middle of August in the SunBet Challenge Time Square at Wingate Park.

“My recent form is based on working hard and working on the right things,” he said. “My coach Grant Veenstra has helped me a lot.”

Chasing a win will keep him focused on all those right things. “Being in the hunt is why we play the game,” he said. “Obviously there will be nerves tomorrow, but I’ll focus on the same things I have been focusing on, and that’s keeping the ball in play and trying to give myself opportunities.”

We live in a world where facts and fiction get blurred
In times of uncertainty you need journalism you can trust. For only R75 per month, you have access to a world of in-depth analyses, investigative journalism, top opinions and a range of features. Journalism strengthens democracy. Invest in the future today.
Subscribe to News24
Next on Sport24
Palmer bogey-free at Centurion after sinus surgery

Choose your newsletters
Voting Booth
The Springboks return to Rugby Championship action to take on the Wallabies this weekend. How will they fare?
Please select an option Oops! Something went wrong, please try again later.
Boks to win by plenty
17% - 1566 votes
The Boks will win, but it'll be tight
55% - 5182 votes
I reckon the Wallabies at home will get the win
20% - 1935 votes
It's too close to call!
8% - 788 votes
Previous Results
Showmax
How Jurgen Klopp saved Liverpool