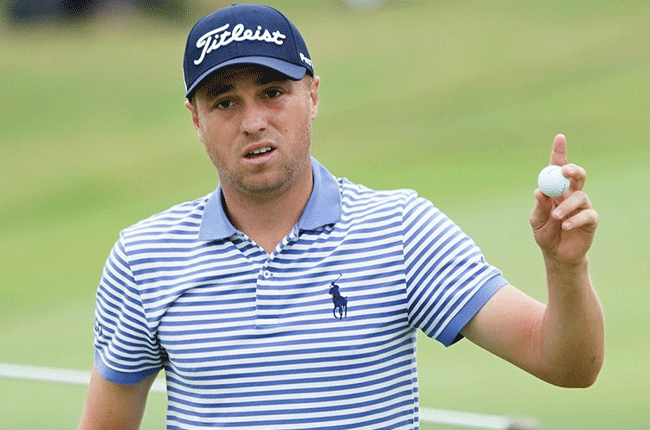 Justin Thomas closed with a 25-foot birdie putt to seize a one-stroke lead after Thursday's first round of the 120th US Open, while three other major winners lurked within two shots.

Third-ranked Thomas, the 2017 PGA Championship winner, fired a five-under par 65 at Winged Foot with a pack one back on 66 including Patrick Reed, the 2018 Masters winner who had a hole-in-one, 21-year-old American Matthew Wolff and Belgium's Thomas Pieters.

"This is one of the better rounds I've had tee to green," Thomas said. "I was very proud of my patience. I got off to a good start."

Thomas, who fired the lowest US Open round ever at Winged Foot, began with a birdie, took a bogey at the par-3 third, answered with an eight-foot birdie at the par-4 sixth and then reeled off three consecutive birdies starting at the par-5 ninth before his impressive final putt.

"It was a good day for me," Thomas said. "I've just played really solidly."

Reed aced the 165-yard par-3 seventh and ran off three birdies in four holes on the back nine to share the lead until Thomas's last shot at the famed Mamaroneck, New York, layout.

Reed also blasted out of deep rough to two feet to save par at 16.

"It definitely was a scramble out there," Reed said. "What kept me in it was the short game."

There were no spectators to applaud any amazing shots as a coronavirus pandemic precaution, the deadly virus having delayed the event from its usual June date and sidelined Pieters until last month.

Pieters, third in his coronavirus comeback, closed with an eight-foot birdie putt at the ninth.

"I kind of knocked the rust off and came here with a bit of confidence because I'm hitting it well," said Pieters. "Just got to put down a good score and I did today."

Wolff, the 2019 US college champion making his US Open debut, reeled off three consecutive birdies starting at the par-4 11th and closed with five pars to share second.

Four-time major winner McIlroy, playing his first major round since becoming a father with the birth of daughter Poppy two weeks ago, made three of his four birdies on par-3 holes.

"Got off to a really nice start. Hit the ball very well, kept it in play," McIlroy said. "I sort of walked off the green a little disappointed but if someone had given me a 67 at the start of the day I'd have taken it."

Westwood, who would be the oldest US Open winner, sank a 12-foot birdie putt at the ninth hole, his last of the day, to match McIlroy.

"It was a good round of golf. Really solid in every aspect of the game, so I'm pleased with that start," said Westwood, who has 12 top-five major finishes without a victory, three of them in US Opens.

Oosthuizen holed out from 148 yards in the second fairway for an eagle and closed with a birdie at the ninth from inside four feet.

Johnson, who won the PGA Tour Championship two weeks ago, managed only two birdies against a double bogey and three bogeys.

"It wasn't too bad. Just didn't drive it in the fairway enough," Johnson said. "I rolled it really well, but I just didn't make any putts."

Woods, chasing a fourth US Open title at age 44, grinded all day but closed bogey-double bogey for a 73.

Woods birdied three in a row from the ninth through 11th holes but made three bogeys and a double in the last six holes.

"I needed to finish off the round better," Woods said. And I didn't."

"It's a disappointing day," Mickelson said. "I drove it poorly and I putted poorly. I just played terrible."

First-round scores on Thursday in the 120th US Open Golf Championship at Winged Foot in Mamaroneck, New York:

We live in a world where facts and fiction get blurred
In times of uncertainty you need journalism you can trust. For only R75 per month, you have access to a world of in-depth analyses, investigative journalism, top opinions and a range of features. Journalism strengthens democracy. Invest in the future today.
Subscribe to News24
Related Links
Tiger grinds but fades at finish and stumbles to 73
Tiger, Rory try for early charge as US Open begins
US Open: Let Winged Foot be Winged Foot, let golfers beware
Next on Sport24
Sound of silence greets two US Open aces at Winged Foot