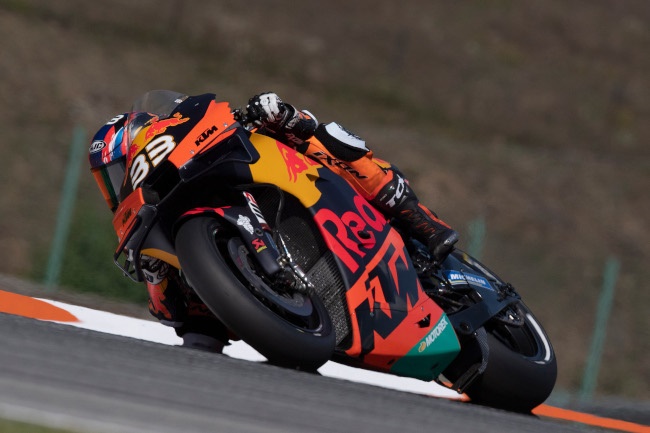 Australian Jack Miller produced the best time in Friday's practice at the European MotoGP in Valencia, while championship rivals Joan Mir and Fabio Quartararo cracked the top 10 despite struggling in a wet opening session.

After dominating on a slick track in the morning practice, Ducati rider Miller set a fastest lap of 1min 32.528sec as the Ricardo Tormo circuit dried in the afternoon session.

Aleix Espargaro was a surprise second ahead of Franco Morbidelli, Quartararo's Yamaha-SRT team-mate and the Teruel Grand Prix winner from two weeks ago.

Quartararo bounced back to finish ninth in the second session having come 21st and last earlier in the day. Mir, who leads the MotoGP standings by 14 points, was 10th with both riders over 0.8sec behind Miller.

South African Brad Binder, seventh on Friday, will serve a long lap penalty in Sunday's race as punishment for the KTM rider's collision with Miller in the previous grand prix.

Quartararo, who faded badly after starting two of the past three races on pole, showed his frustration by banging his fist on his fuel tank after sliding off the track in soggy morning conditions.

But the French rider, who has won three races this season, moved up the timesheets as the weather improved for the second session.

Mir had initially fared little better than Quartararo in the first run out when he finished 1.6 seconds adrift of Miller in 17th place.

Garrett Gerloff, deputising for Valentino Rossi, was 19th on his MotoGP debut. Seven-time champion Rossi is awaiting the results of a Covid-19 test to see if he is allowed to take part in this weekend's race.

The Valencia MotoGP will be held on the same circuit next weekend before the season finale takes place at Portimao in Portugal on November 22.

We live in a world where facts and fiction get blurred
In times of uncertainty you need journalism you can trust. For only R75 per month, you have access to a world of in-depth analyses, investigative journalism, top opinions and a range of features. Journalism strengthens democracy. Invest in the future today.
Subscribe to News24
Related Links
Morbidelli wins Teruel MotoGP as SA's Brad Binder crashes out
Japan's Nakagami takes first MotoGP pole in Spain, SA's Brad Binder 15th
Rins wins Aragon MotoGP, SA's Brad Binder 11th as Mir takes championship lead
Next on Sport24
SA's Lance Woolridge joins Extreme E team as reserve driver