DHL responds to speculation that they're financing SA's Formula 1 return: 'It's just that' 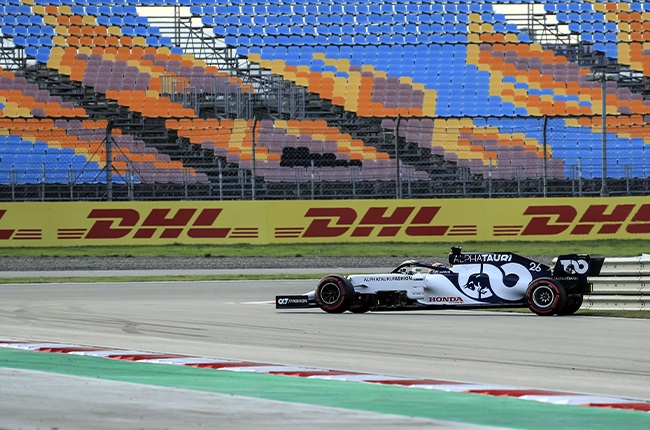 Formula One's global logistics partner DHL has responded to rumours that the company is set to be a major financier of the sport's mooted return to South Africa, saying the speculation was "just that".

With several races at risk of losing their slots on the 2023 calendar, it could open the door for a local GP, and the Kyalami Circuit is earmarked as the host venue.

DHL Express Sub-Saharan Africa vice-president of marketing, Megan Collinicos, told Sport24: "DHL is the official logistics partner of Formula 1 globally. The 2023 calendar has not been published yet, and speculation around the race is just that."

In the last month, two unofficial reports claimed that the South African GP will indeed go ahead and that international logistics giant, DHL, will be the event's major commercial partner.

Anonymous Twitter account F1 Paddock Insider's post claimed the South African Grand Prix would return next year, with Formula One and DHL having signed a five-year contract, sending F1 fans into a frenzy.

Though the unconfirmed reports have spread across social media like a wildfire, Sport24 sought official confirmation from Formula One Management (FOM), the FIA, and Liberty Media. However, the organisations are yet to make an official announcement, with F1 Paddock Insider suggesting that said announcement can be "expected this week".

DHL rumoured to fund F1's return to SA, but 'there's no existing contract with Kyalami'

Being a leader in logistical matters, DHL has been involved in F1 for more than 40 years, making it the sport's longest-standing global partner.

In the years that followed, the group's motorsport involvement stretched to include the World Touring Car Cup, the World Endurance Championship, Formula E, and MotoGP. The FIA governs all these series.

The logistical support DHL offers F1 includes bringing all 20 cars - weighing 795kg each - to every race on the F1 calendar. This year, the sport races in 20 countries across five continents. DHL also transfers the broadcast equipment, car and team equipment, hospitality equipment, and fuel and tyres.

DHL says on its official website: "We are proud to support F1 along this journey. From physically delivering the series to engaging with fans both virtually and in real life, we're proud to make this hair-raising sport more accessible for all. Just like out on the track, the behind-the-scenes action at a Grand Prix is all about speed, precision, and state-of-the art technology."

DHL is also the founding partner for the DHL Fastest Lap and DHL Fastest Pit Stop awards. These are awarded to the driver (fastest lap) and team (fastest pit stop) at the end of each season.