Many South Africans had their excitement drop to their boots when it was confirmed that a Formula 1 race on home soil would not occur in 2023. Motorsport's pinnacle series last visited the African continent in 1993, and hopes were high that the Kyalami Circuit's three-decade absence would finally be over.

It was not to be, and it seems that it's not just the public who wants answers, but politicians, too.

Denis Joseph, a National Assembly and Democratic Alliance (DA) party member, posted direct questions to the South African Minister of Sports, Arts, and Culture, Nathi Mthethwa, with his office responding to it. Is there support for F1's return?

Since news of SA's inclusion on the F1 calendar began circulating, one of the big questions was whether our Government would support such a venture. Attempts from News24 Sport for Government comment yielded no success, with phone calls ending on the empty promises of responding to emails.

Joseph, though, didn't beat around the bush with his opening question, kicking in the door and asking if Government was in support of F1's return to Mzansi. The minister's office confirmed that Government does support it.

Sadly, while Government supports F1's return, they did nothing from their side to gauge the public's interest, nor the economic impact an event of this calibre could have on Gauteng and South Africa.

"The Department has not conducted any research and/or work with any Departments nor the private sector to measure the interest and identify the economic impact, especially market branding for the Republic," the office said in an official statement.

Willie Venter, a member of the Kyalami management team, noted that the biggest beneficiary of an F1 race in South Africa would be the economy.

"The only organism or organisation that can really harness all of the financial benefits from an international event of this scale is the South African economy," he said.

"This happens through employment opportunities, money injected into the economy, and tourism. Even though [the] Government will not be directly involved, apart from regulatory issues, visas, transport, authorisation, etc, it's the SA economy that stands to gain the most significant financial benefit." Currently, the Kyalami Circuit has FIA Grade 2 certification, making it eligible to host many international FIA-backed motoring events, but not F1. F1 requires Grade 1 certification, and the Kyalami Management team confirmed to Sport24 earlier this year that they are indeed putting plans in place to acquire it.

The upgrades required were installing tech-pro barriers at certain corners, modifying the sausage curbs to make it F1 friendly, replacing gravel run-off areas with tar, and upgrading the venue to accommodate the expected weekend attendees - 90 000 visitors on race day.

READ: DHL responds to speculation that they're financing SA's Formula 1 return: 'It's just that'

With funding for the upgrades a big hurdle, along with other behind-the-scenes challenges, upgrading the Circuit to FIA Grade 1 could not happen, and Government did not get involved with it. The office said that because Kyalami is privately owned, they have no insights into what is needed and what needs to happen. 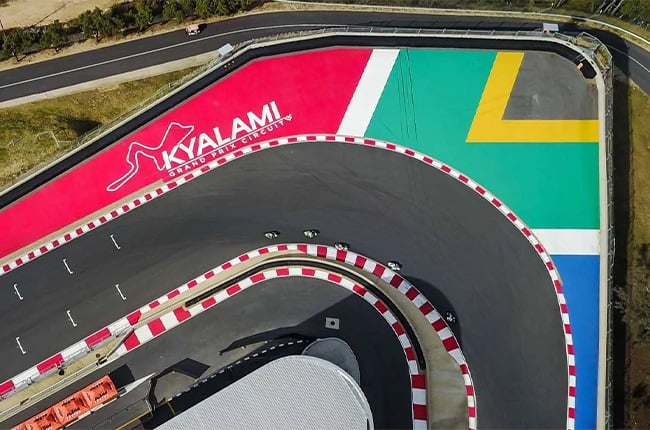 Can F1 still come to SA, though?

The promoters looking to bring F1 to SA, the South African Grand Prix Association, failed to bring the race to Kyalami. Little detail is known about why it failed, but a new race promoter is needed if Kyalami wants to make it onto the 2024 F1 calendar.

From the Kyalami Circuit's side, they are ready and need the necessary support to bring about the upgrades. And it could open the door for a new race promoter to work more closely with the South African government to make F1's return to South Africa a reality. This includes approaching the Department of Sports, Arts, and Culture for financial support. And a comment in the office's response suggests that they were not approached for monetary support.

"The Department is not aware whether any financial guarantees would be needed from Government," it read. "This is because the Department has not received any application Bid for F1 as prescribed by the Bidding and Hosting of International Sport and Recreational Events Regulations."

It is clear that the parties involved in bringing F1 back to South Africa did not work together. Both the private and public sectors should have taken hands in making the venture a reality instead of ignoring the other's importance. The privateers who sought F1's 'homecoming' should have worked closely with Government - regardless of how difficult getting a reaction is - and Government should have shown more interest if they were so supportive of F1's return.

2024 will present another opportunity for South Africa to host an F1 race, and we can only hope that lessons were learned in this disastrous venture of missed opportunities.