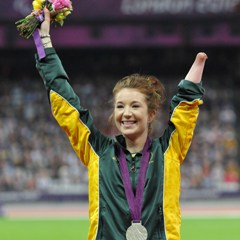 Sports minister Fikile Mbalula gave the monetary boost to South Africa’s Paralympic medal winners on Saturday, when he announced their financial incentives would be increased to equal those of Team SA at the London Olympics.

An overwhelming majority of Sport24 readers agreed that anything less would be discrimination, and that Paralympians worked as hard and faced as many challenges - if not more - than Olympians.

In an online poll conducted by Sport24, we asked the following:

These were the results of our poll:

91% - Definitely, they worked equally hard to achieve their success
6% - No way! Far fewer opponents and far more events at the Paralympics to warrant equal payouts
3% - Touchy subject, not getting involved...

Here's what Sport24 readers had to say about equal financial compensation for Paralympian medalists:

"The Paralympic athletes deserve the same payouts – they represented South Africa – and earned their medals as the competition was tougher this year than previous Paralympics, irrespective of how many athletes entered for an event.  Their preparation for the games also tougher on them, it cannot be easy for them to get around and to get to practice venues." - t-amassyn

"Yes,  I definitely think the Paralympians should get the same monetary payouts as the Olympians! I think it is more difficult for them to be motivated and to get going!" - Beth Hyman

"I think they do because both represented SA. Paralympians even won more medals." - phanuelgope\

"BEST news I have read all day!!! These athletes DESERVE it!" - cynthia.biljoen

"They have indeed made us even prouder to be South Africans." - Siyanda Walter Mda

"They deserve the cash incentive." - Charles.Minie

"I applaud you, Mr Mbalula. Our paralympians have certainly humbled many of us. You rightfully stand as the best sports minister we have had since the start of our '94 democracy." - keith.gough

"Great news, me thinks with the obstacles Paralympians face to achieve their goals,they are a shinning example about humanity's perseverance and should therefore be rewarded more." - juicecard.tshaka

"You gotta love our sport minister, an impeccable character." - sakhile.s.matewane

"Considering the team did considerably better in terms of medal haul vs the able body team, they should have been paid more, fantastic achievement!" - justin.fritelli

"There should never have been a difference in bonuses in the first place. Most of the paralympians have had a lot more obstacles to overcome than the able bodied athletes." - Justin.d.Glenn

"Why discriminate just cos they don't attract the same crowds as the Olympics... Point being they put in as much effort to keep SA's name high as our non-disabled athletes." - Justin.D.Tredoux Athletes like Oscar Pistorius have inspired the nation as the Paralympics finally stepped out of the shadow of the Olympics. (Gallo Images)

We live in a world where facts and fiction get blurred
In times of uncertainty you need journalism you can trust. For 14 free days, you can have access to a world of in-depth analyses, investigative journalism, top opinions and a range of features. Journalism strengthens democracy. Invest in the future today. Thereafter you will be billed R75 per month. You can cancel anytime and if you cancel within 14 days you won't be billed.
Subscribe to News24
Related Links
Money ready for SA heroes
Sascoc splash extra R4.26m
Du Toit to pocket R1.4m
Next on Sport24
Springboks year in review, possible causes and the way forward