Duplantis vaults into history and gives athletics a new star 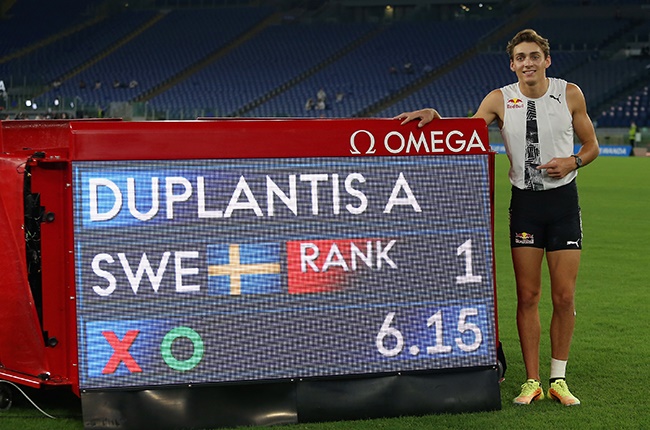 Armand Duplantis has pole-vaulted into history aged just 20, eclipsing the outdoor world record of Sergey Bubka that has stood since 1994 to give track and field a fresh-faced new star.

The ease with which Duplantis sailed over the bar set at 6.15 metres in the warm Rome air on Thursday suggests there will be more records to come.

The American-born Swede known as "Mondo" was already the overall world record holder, breaking the mark in indoor meetings on consecutive weekends in February, the second, in Glasgow, raised it to 6.18m.

But the favourable conditions indoors, without wind, mean that for purists the outdoor record is the mark that really counts.

The coronavirus pandemic disrupted his early season but at meetings in Monaco, Stockholm, Lausanne and Brussels, Duplantis cleared six metres, showing a new record was within reach.

"I think I'm still up in the clouds right now," he said after his history-making jump in Rome. "It's surreal, it's surreal, it's a super-crazy feeling when everything lines up like that and you do a really good performance."

Ukrainian Bubka broke the world record on 17 occasions in the 1980s and 1990s, famously edging the mark up by one centimetre on no fewer than nine occasions between 1988 and 1994 so he could collect a bonus each time.

Duplantis said he had wanted to erase any doubt that he was the best vaulter in history both indoors and out.

"There was kind of this confusion between the indoor and outdoor record, it's kind of merged. I already had the world record but I wanted to clear everything up and be the best outdoors."

Born and raised in Louisiana, Duplantis is a photogenic new star in a sport searching for star quality since the retirement of Jamaican sprint legend Usain Bolt in 2017.

His exuberant celebrations and looks straight out of a teenage romantic film mean he fits the bill.

Coached by his American father Greg, a former pole vaulter, Duplantis is a product of a track and field-crazy family which had their own vaulting apparatus in the garden.

His older brother Andreas vaulted for Sweden at various age-group championships, while another sibling Antoine dropped pole vault in favour of baseball.

He started pole vaulting, which requires the speed and strength of sprinter and the flexibility of a gymnast, when he was four years old.

He announced his talent to the world when he cleared 5.90m aged just 17 at the Texas Relays in Austin in 2017.

He turned professional last year after one season on a scholarship at Louisiana State University.

After his world record spree, Duplantis recognises he needs to take the gold medal at the re-arranged Tokyo Olympics next year. He was pipped to a first senior world title by American Sam Kendricks in Doha last year.

"If you want to be remembered as the best ever, you have to get it right when the moment is right and when you really need to," he said.

"So when it comes time for the Olympics, World Championships, even the next European Championships, I will go there and get it done and try to be on top of the podium."

We live in a world where facts and fiction get blurred
In times of uncertainty you need journalism you can trust. For only R75 per month, you have access to a world of in-depth analyses, investigative journalism, top opinions and a range of features. Journalism strengthens democracy. Invest in the future today.
Subscribe to News24
Related Links
Movement formed which backs Caster Semenya in her fight with World Athletics
Akani Simbine dips below 10s in winning 100m Diamond League race in Rome
Warholm sets blistering pace but misses world record
Next on Sport24
2021 Boston Marathon moved from April slot over virus concerns