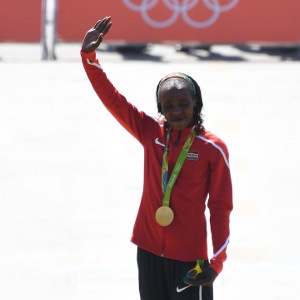 Monaco - Kenya's Olympic marathon champion Jemima Jelagat Sumgong has had her doping ban doubled to eight years for trying to tamper with a positive test for EPO, the Athletics Integrity Unit said on Friday.

Sumgong, whose triumph at the 2016 Rio Games made her the first Kenyan woman to win the Olympic marathon crown, was found to have provided "fraudulent medical information".

She had already been banned for four years for failing an out-of-competition test five months after winning the Olympic gold.

That ban has been doubled after it was found Sumgong, now 34, had falsely claimed she was injected with EPO by an "imposter" at a Kenyan hospital during a doctors' strike.

She had tried to explain her positive test by claiming she had suffered a ruptured ectopic pregnancy that had led to her receiving an injection and a blood transfusion.

But the paperwork was found to be fake and the Nairobi hospital she claimed to have visited said a serious condition such as a ruptured ectopic pregnancy would have required a four-day stay.

The final straw came when Sumgong was unable to explain why she was in Kapsabet - a five-hour drive away from Nairobi - at the time.

We live in a world where facts and fiction get blurred
In times of uncertainty you need journalism you can trust. For only R75 per month, you have access to a world of in-depth analyses, investigative journalism, top opinions and a range of features. Journalism strengthens democracy. Invest in the future today.
Subscribe to News24
Related Links
Bolt retires from sport, ends short-lived football dream
Bolt retires from sport, ends short-lived football dream
IAAF clears 42 Russian athletes to compete
Next on Sport24
Russia drops appeal against athletics doping ban