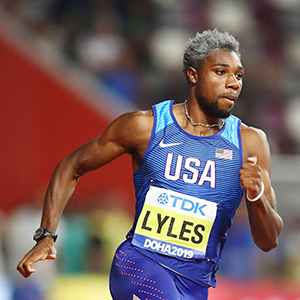 Doha - Noah Lyles produced a superb performance to win the world 200 metres title in his first major championships on Tuesday.

The 22-year-old American -- who has earned comparisons with retired Jamaican legend Usain Bolt -- went clear at 50 metres out to cross the line in 19.83 seconds.

Lyles -- who has run quicker over 100m and 200m than Bolt at the same age -- was behind Britain's Adam Gemili entering the straight but powered past him.

In winning, Lyles also delivered the perfect response to Bolt questioning prior to the championships if he could handle the pressure.

De Grasse, bronze medallist in the 100m, added yet another medal to his growing collection as both he and surprise package Quinonez, the PanAm champion, passed a tiring Gemili.

It was more agony for the Briton as he had been edged out of the bronze in the 2016 Olympic final.

2017 champion Ramil Guliyev of Turkey -- who had strapping on his right knee -- finished fifth.

We live in a world where facts and fiction get blurred
In times of uncertainty you need journalism you can trust. For only R75 per month, you have access to a world of in-depth analyses, investigative journalism, top opinions and a range of features. Journalism strengthens democracy. Invest in the future today.
Subscribe to News24
Related Links
Kendricks defends pole vault title
USA's Brazier wins 800m gold at World Champs
Hassan will need stubborn streak to absorb Salazar blow
Next on Sport24
World 100m champion Coleman handed two-year ban, to miss Olympics