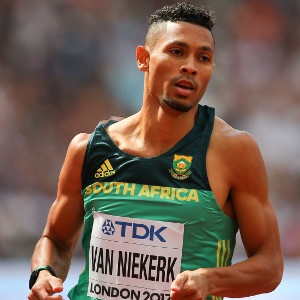 A number of injured athletes have also been given places in the provisional squad, including Olympic 400m champion Wayde van Niekerk.

They will need to prove their full fitness if they hope to make the final team for the Tokyo Games.

Caster Semenya, who won the women's 800m title at the 2016 Rio Games, has also been included, although her place in the final team will depend on the outcome of an appeal lodged at the Federal Supreme Court of Switzerland regarding international gender rules on women.

The provisional squad, which were selected based on their performances in 2019, will be monitored by the ASA high performance department in the build-up to the Tokyo Games where the track and field competition is scheduled to take place from July 31 to August 9.

The final ASA team will be announced by SASCOC (the SA Sports Confederation and Olympic Committee) closer to the Games.

"There are a lot of expectations from this team after the failure to capture medals in Doha. The Olympics are going to be a new competition for everyone even to those who were crowned champions at the World Champs," said Aleck Skhosana, the President of ASA.

We live in a world where facts and fiction get blurred
In times of uncertainty you need journalism you can trust. For 14 free days, you can have access to a world of in-depth analyses, investigative journalism, top opinions and a range of features. Journalism strengthens democracy. Invest in the future today. Thereafter you will be billed R75 per month. You can cancel anytime and if you cancel within 14 days you won't be billed.
Subscribe to News24
Related Links
Jepkosgei downs Keitany to win New York marathon
Kamworor storms to New York marathon victory
Olympic marathon to be moved as Tokyo gives grudging support
Next on Sport
Samuel Tshabalala: The Comrades Marathon torchbearer who lit the path for black athletes