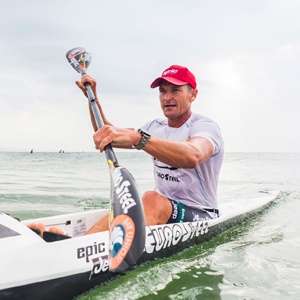 Hong Kong - The South African men followed up on the impressive domination of their women's team at the ICF Ocean Racing World Championships, filling five of the top seven places, with Hank McGregor losing a thrilling title race to the Australian defending champion Cory Hill.

In sharp contrast to the conditions for the women's race, overnight winds whipped up three metre high swells, and made the fabled 22km Dragon Run course a test of pure downwind and ocean racing skills.

After having lost a few Dragon Run dices to McGregor, Hill was always watching over his shoulder as McGregor and Jasper Mocké shadowed him throughout the race.

With the pressure starting to tell in the closing stages of the race Hill and McGregor opted for a chancy inside line at the Kissing Whales turn, where McGregor lost time after being caught in the big surf.

"Hats off to Corey, he raced a great race," said McGregor afterwards.

"I got swamped at Kissing Whales, and that cost me sixty or seventy metres. Kenny (Rice) just went straight past me.

"I had to gather my thoughts and come back, but it just wasn't good enough," he added.

"Of the eight or nine years that I have been coming to this race, this was definitely the biggest we have ever had," said Mocké.

"I had a fantastic downwind leg and managed to move steadily through the field," he added.

There was celebration in the Team SA camp as Under-23 star Rice became the team's third world champion at the event, following Hayley Nixon's win in the senior women's race and Sabina Lawrie doing the same in the junior girls.

"I had a fantastic race after a bit of a chaotic start," said Rice, who finished fourth overall.

"I had a really good downwind leg where I managed to catch up and raced close to Hank for some of the race. It was pretty surreal!"