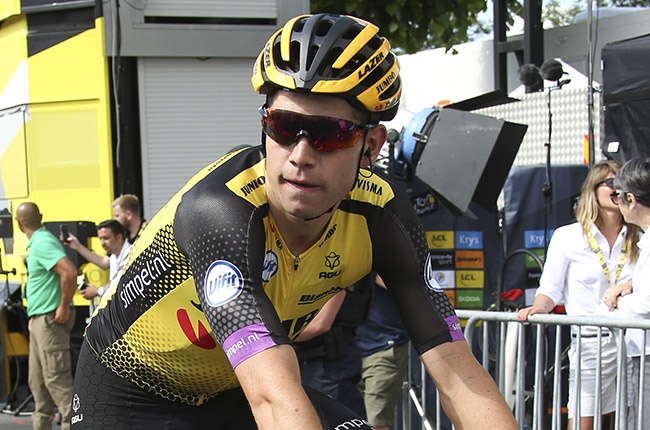 Belgium's Wout Van Aert won a sprint finish to clinch the Milan-San Remo, his first victory in one of cycling's 'Monument' one-day classic races on Saturday.

The Jumbo-Visma rider pipped last year's winner Julian Alaphilippe of France on the line after the gruelling 305km race in hot and sunny conditions through north-western Italy.

Van Aert crossed the finish line on the Italian Riviera after 7hrs 16min and 09sec in the saddle, just a week after winning his first major one-day race, the Strade Bianche, in Tuscany.

"It's unbelievable to win Milan-San Remo after Strade Bianche," said 25-year-old Van Aert, who also finished third in the Milano-Torino this week.

"Today is a special day as I won my first Monument. It has been a beautiful restart of the season for me."

He added: "On the Poggio (hill), I was at the limit, the effort was horrible for my legs.

"Alaphilippe attacked earlier than I expected and I couldn't hold his wheel so I had to go and chase him down.

"He played it very well. Luckily I just had enough power left to beat him on the line."

"As a Belgian, the Tour of Flanders and Paris-Roubaix are on top of my list," added Van Aert of the two races in October.

"I climb quite well and I have a good TT (time trial). Everything except Grand Tour victories should be within my capabilities."

The Italian race was six kilometres longer than normal to avoid the city of Alessandria, 190km east of San Remo, which had been hit by heavy thunderstorms in recent days.

Seven local riders built up an early advantage in a race which had been postponed for five months because of the coronavirus pandemic.

The peloton picked up heading into the final 36km, where the race resumed its classic course.

Alaphilippe suffered a puncture on the Cipressa climb, the penultimate difficulty of the race.

The French rider ignited the attack on the Poggio, the last ascent, at the threshold of the final six kilometres.

But Van Aert, who had been trailing four seconds behind the Deceuninck-Quick Step rider, hit back on the downhill with the pair battling it out until the line.

The Belgian was able to position himself on the foot of the climb with the three-time cyclo-cross world champion holding on to emulate Alaphilippe, who also won the Strade Bianche and Milan-San Remo last year.

"Wout was very strong and he deserved the victory," said Alaphilippe.

"I went full gas on the Poggio but in the downhill, I understood I could have not made the difference on my own so I worked together with Wout.

"It was a very hard sprint, fighting against each other. The strongest rider won."

"On the second part of the Poggio I wanted to attack but a couple of riders in front of me closed me and I scraped my hand and shoulder against the wall," said Matthews.

"From that point, I could not hold the handlebar properly."

We live in a world where facts and fiction get blurred
In times of uncertainty you need journalism you can trust. For only R75 per month, you have access to a world of in-depth analyses, investigative journalism, top opinions and a range of features. Journalism strengthens democracy. Invest in the future today.
Subscribe to News24
Related Links
Roglic fires Tour de France warning to Bernal with Ain stage win
Dylan Groenewegen suspended after horror crash which left Tour of Poland rival in coma
Ineos and Jumbo exchange blows at Tour de l'Ain
Next on Sport24
Cavendish suffers broken ribs and collapsed lung in crash