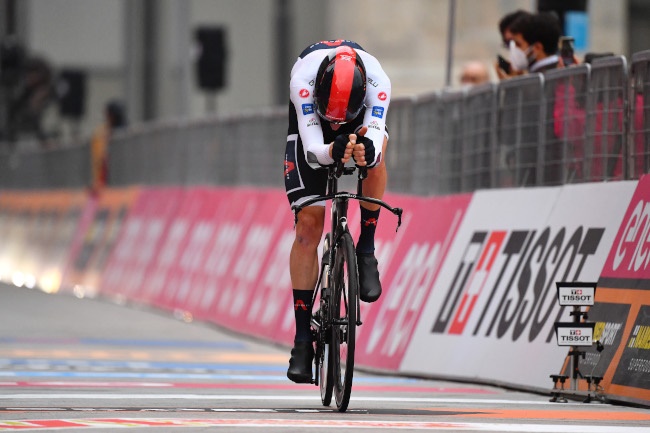 Geoghegan Hart had been on the same time as Hindley going into the final 21st stage but finished 38seconds ahead of the Team Sunweb rider.

"It's going to take a long time to sink in," said the Londoner.

"He kept giving me a few seconds and I knew not to take any risks."

"It feels incredible to arrive here in front of the Duomo," Geoghegan Hart said.

World champion Filippo Ganna of Italy was first in the 15.7km time-trial which finished in front of Milan's Duomo Cathedral.

Geoghegan Hart won Saturday's 20th stage, edging Hindley, with for the first time in a Grand Tour two riders going head-to-head for the title in the final time-trial.

But the suspense did not last until the line with Hindley, wearing the pink jersey, dropping 22 seconds at the intermediary stage after 10.3km.

The 24-year-old nevertheless becomes the first Australian on the Giro Podium.

Geoghegan Hart, 25, is the second British rider to win the race around Italy, two years after Chris Froome.

Neither rider had been their team leader when the race got underway in Sicily three weeks ago. Ineos lost Geraint Thomas to a broken pelvis in stage four.

The victory was a boost for Ineos who had a disappointing Tour de France with defending champion Egan Bernal's withdrawal, while Ecuadorian Richard Carapaz did not defend his Giro d'Italia title but competed in the Vuelta a Espana.

We live in a world where facts and fiction get blurred
In times of uncertainty you need journalism you can trust. For only R75 per month, you have access to a world of in-depth analyses, investigative journalism, top opinions and a range of features. Journalism strengthens democracy. Invest in the future today.
Subscribe to News24
Related Links
Geoghegan Hart wins Giro 20th stage, Hindley in pink
Josef Cerny storms to Giro win as rain and protest sees 130km cut from race
Sam Bennett sprints to victory in Vuelta stage 4 as Roglic keeps race lead
Next on Sport24
More than 3 months after crash, Jakobsen rides again