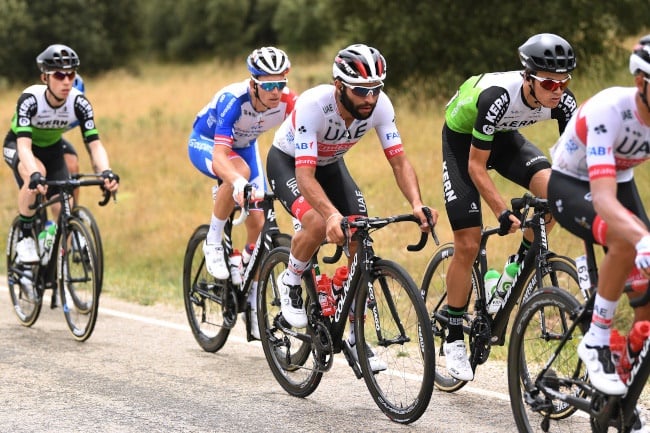 UAE Team Emirates' Dombrowski crossed the line 13 seconds ahead of Italian De Marchi to claim the first Grand Tour win of his career on a soaking wet, 187 kilometre run between Piacenza and Sestola in the northern Apennine mountains.

Dombrowski, 29, won his first race in Europe on the toughest day of the Giro so far.

His most notable result since becoming a professional with Sky (now Ineos) in 2013 had been a 12th place finish in the 2019 Giro.

He dropped De Marchi, who was also part of a breakaway group of 25 riders formed after 40km, on the hardest slopes of the final Colle Passerino climb 5km from the finish.

"It wasn't enough for the pink jersey but I think the stage win is a nice way to finish the day," said Dombrowski.

"When you have a group of 25 riders, it's never everyone cooperating, so you need to be ready for attacks. I knew De Marchi was maybe the strongest rider in the breakaway, so if I always took his wheel, I would be in a good spot."

De Marchi, 34, wears the pink jersey for the first time in his career on his fifth Giro appearance, and sits 22 seconds ahead of Dombrowski in the overall standings, taking the overall lead from compatriot Filippo Ganna.

"The goal was the pink jersey, I started thinking about it maybe two days ago even if I didn't tell anyone!" said De Marchi.

"I'm lost for words really, it's the dream for any cyclist, especially if you are Italian."

A small group of riders tipped to perform well in this year's Giro, including 2019 Tour de France winner Egan Bernal, finished the stage more than a minute and a half behind Dombrowski.

Belgian Evenepoel sits eighth in the general classification, 1.48 behind De Marchi. Yates is a further second back in 16th and Bardet 19th, 2.03 behind.

Vincenzo Nibali is 2.15 back while Evenepoel's Deceuninck-Quick-Step team-mate Joao Almeida gave up more than four minutes on his rivals and is 5.38 back in the overall standings.

Portuguese Almeida, who finished fourth in last year's Giro, was the day's big loser on a day marked by rain and cold temperatures of nine degree Celsius and fell away on the early part of the Passerino climb

On Wednesday, the fifth stage traces an almost straight line from Modena to Cattolica over a 177-kilometer course without the slightest roughness, ideal for sprinters.

Results and standings from Tuesday's fourth stage of the Giro d'Italia, a 187km ride between Piacenza and Sestola:

We live in a world where facts and fiction get blurred
In times of uncertainty you need journalism you can trust. For only R75 per month, you have access to a world of in-depth analyses, investigative journalism, top opinions and a range of features. Journalism strengthens democracy. Invest in the future today.
Subscribe to News24
Next on Sport24
Chris Froome wins battle to race Tour de France again