Bernal's Ineos teammate Russia's Pavel Sivakov was second at 10 seconds and Astana's Aleksandr Vlasov third 17 seconds behind less than a month ahead of the rescheduled Tour.

The Colombian punched the air joyously as he soloed over the finish line to rapturous applause from the fans who had defied the vehicle ban by walking or cycling to the mountain summit finale.

Bernal also clinched the overall lead of the four-day race, on a stage typical of those found on the Tour with around 40km of hard climbs.

"This is a test day for all the favourites of the Tour," France's Thibaut Pinot said ahead of the stage in which he finished fourth 31 seconds behind the 23-year-old winner.

A household name in his homeland since winning last year's Tour, he warmed up for that by taking overall victory in the Paris-Nice and Tour de Suisse, and looks a nailed on favourite to win this season's race.

Four-time Tour winner Chris Froome was dropped at the bottom of the final climb and ended the day over five minutes adrift of Colombian Bernal.

French climber Romain Bardet, who fell heavily on Sunday, was 1 minute 18 seconds off the winner.

After negotiating the narrow lanes in the Pyrenean foothills the race went up the 10km of the Col de Peyresourde at an average of 7.5%, then ascended the slightly longer Col de Beyrede at 7.2%.

Die-hard cyclo-tourists and those fit enough to go up on foot had defied the 24-hour traffic ban on the day's final climb.

There were camper vans and crowds of masked fans, but it was a far cry from the kind of pop up motorhome villages that traditionally straddle summit finishes on the Tour.

This year's Grand Boucle's start date was postponed to August 29 due to the coronavirus pandemic. 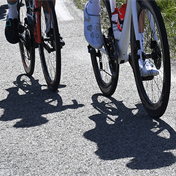