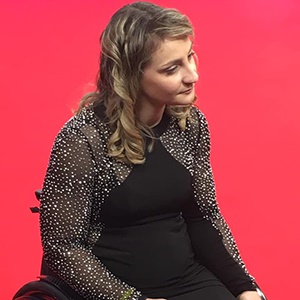 Monaco - German track cycling great Kristina Vogel told AFP that despite being paralysed she will still feel her passion for the sport burning when she commentates on this week's world championships in Poland.

The 28-year-old - a two-time Olympic champion and the winner of 11 world track gold medals - suffered life-changing injuries last June when training at the Cottbus Velodrome.

Travelling at around 64km/h, she slammed into a Dutch rider who had just moved onto the track to warm up.

Having already once before recovered from serious injuries  she went through the windscreen of a van in 2009 - this time there was to be no return as she suffered catastrophic spinal injuries leaving her paralysed from the chest down.

"The fire is still here," Vogel told AFP at the Laureus Awards in Monaco.

"When I am watching sport, it still burns. When I see how people fight on the track, I am really enjoying it because I can re-enact what happens on the track. The joy of winning and then celebrating.

"After my accident on the track it didn't go away. I hope I can give the viewers (watching the Poland event) something extra, with the fire I have in me.

"I hope I can still give this fire a purpose."

Vogel says her mother has been a source of great strength.

"My mum always said, even if I am not religious, she thinks that God gives us tasks that he thinks we can fulfil.

"To me, it just means there is someone there who thinks I am really strong. It makes these challenges a bit easier to accept, and somehow, make the best out of it."

Vogel acknowledges that other athletes might have called it a day after her first accident.

"I wasn't done with track cycling yet. But yes, well, someone decided otherwise for me."

Vogel, who was born in Kyrgyzstan but moved with her parents to Germany when she was six months old, has adapted to a new sport - wheelchair archery.

However, despite speculation she might try to compete at the Paralympics she says she is only doing it for her physical well-being.

"At the moment I do not miss the competition," she said.

"I am doing archery because it's important for my stomach and core strength.

"I am paralysed up to the chest. Which means I have no abdominal or back muscles, but I still need to use these in my daily life. So any sports I can do is good."

Vogel's plight has sparked many fans and fellow cyclists to rally round - including British track cycling icon Chris Hoy.

Hoy said he was struck how Vogel - who he nicknames the 'Queen Bee' - inspired people to smile when he went with her to an archery event in Berlin.

"It makes me blush when Chris Hoy says something about me - I still believe I am just little Kristina," she said.

"I don't know, maybe there is a reason why I am known as the Queen Bee.

"I'm still around. And that's a cute nickname that I would like to keep."

We live in a world where facts and fiction get blurred
In times of uncertainty you need journalism you can trust. For only R75 per month, you have access to a world of in-depth analyses, investigative journalism, top opinions and a range of features. Journalism strengthens democracy. Invest in the future today.
Subscribe to News24
Related Links
Peace at last between 'Special One' and Wenger
Djokovic the big winner at Laureus awards
Rosberg: Hamilton might not have it his own way
Next on Sport24
Former pro cyclist Chris Anker Sorensen dies in Belgian crash

Choose your newsletters
Voting Booth
With the Springboks losing their last two matches against Australia, how concerned are you?
Please select an option Oops! Something went wrong, please try again later.
Very concerned! Something is not right ...
59% - 3080 votes
I'm not worried. Every team has a bad game. The Boks will bounce back.
18% - 926 votes
It's too early to tell. Let's see how they go against the All Blacks.
24% - 1258 votes
Previous Results
Showmax
How Jurgen Klopp saved Liverpool