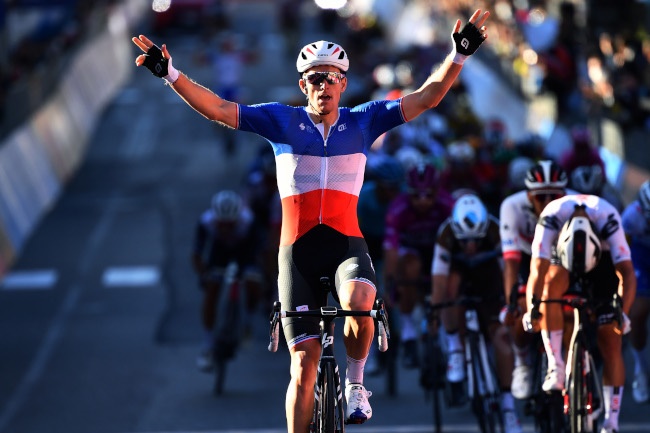 French champion Arnaud Demare outsprinted the peloton on the 6th stage for his second win of this year's Giro d'Italia on Thursday.

The 188-kilometre ride was marked by a four-man breakaway which built up a near nine-minute advantage on the chasing pack at one point.

Approaching the final 30km the gap was down to 90 seconds, with James Whelan the last man standing of the breakaway quartet.

The Australian was caught with 14km remaining, with a strong headwind then thwarting any solo bids for the day's honours.

Peter Sagan's team dictated the pace but the former triple world champion had to settle for eighth in the dash for the line.

Demare launched his decisive stage-winning move in the deceptively rising finish in the historic city in the southern Basilicata region having survived the fast pace set by Sagan's teammate Matteo Fabbri up the short but sharp climb two kilometres out.

"It was steep, I lost a few places but I wasn't blown away," said Demare.

"Magnificent," he beamed after his third career Giro stage success.

"Today, I could barely raise my arms," added the 29-year-old, who had to dig deep to sneak home in a photo-finish in Sicily on Tuesday.

The French rider has scrapped plans to leave the race early in order to line up in the Paris-Roubaix classic rescheduled due to coronavirus for October 25, the last day of the Giro.

"It was a difficult choice between the Giro and the classics," added Demare.

"But I like the adventure, to go off for three weeks. My aim this year was to concentrate on the sprints. The Giro is part of that," added the Groupama-FDJ team leader who was not selected for the Tour de France in a team framed around Thibaut Pinot.

Friday's 143km seventh stage from Matera to Brindisi will give Damare another big chance as it also favours the sprinters in the peloton.

Results and standings in the Giro d'Italia after the 188km sixth stage from Castrovillari to Matera on Thursday:

We live in a world where facts and fiction get blurred
In times of uncertainty you need journalism you can trust. For only R75 per month, you have access to a world of in-depth analyses, investigative journalism, top opinions and a range of features. Journalism strengthens democracy. Invest in the future today.
Subscribe to News24
Related Links
Former British Cycling doctor admits destroying banned testosterone
Alaphilippe blushes forgotten with Belgian semi-classic win
Ganna goes it alone to win Giro d'Italia fifth stage
Next on Sport24
Prosecution concludes British cycling doctor complicit in doping