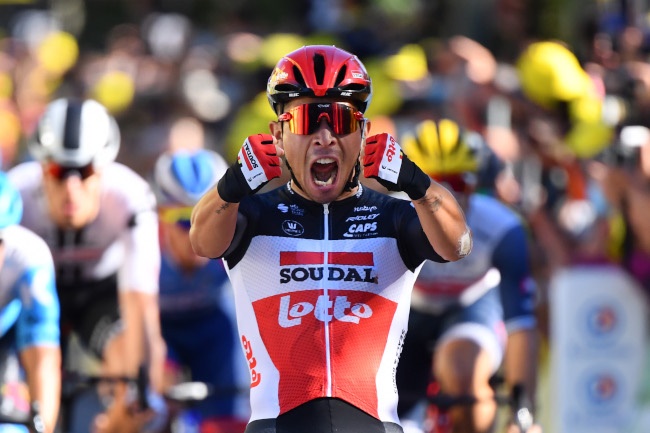 Australia's Caleb Ewan won stage 11 of the Tour de France on Wednesday by the narrowest of margins after a frantic bunch sprint was decided on a photo-finish, as Primoz Roglic retained the overall lead on a sizzling day in terms of temperatures and concluding action.

The diminutive Lotto Soudal rider, who visualises various sprint scenarios on the morning of the race, edged Tuesday's winner and training partner Sam Bennett, who is currently in the green sprint jersey.

"I know how hard he worked and how much it meant to him, but it meant a lot to me too," said Ewan.

"He's one of my closest friends, we're kind of best mates and we live in the same block and we train together."

Originally third in the sprint along the central Poitiers road packed with excited fans, the peloton superstar Peter Sagan was sanctioned after swerving from his line and blocking the late surge of Wout van Aert.

Record seven-time sprint points winner Sagan was expelled from the Tour in 2017 after causing Mark Cavendish to fall in a lively sprint.

"I think it was alright, that's sprinting," said Ewan of Wednesday's swerve.

Van Aert's team Jumbo-Visma leader Roglic was in two minds about the incident.

"It was the right decision in one way," said Roglic, who leads defending champion Egan Bernal by 21 seconds.

"Sprinters are different from the rest of us though, they are crazy guys, it's tougher. But still it needs to be fair," he added.

Cycling's recent series of awful crashes, including near fatal falls in Poland and Italy, continued here in Central France as Astana's Ion Izagirre flew face first into a house after a tight corner in a village.

The stricken Spaniard sat slumped and bleeding from the face and chest before being whisked away.

Ewan won three stages in 2019 and said he will go for a third on this Tour too by crossing the Alps to try his luck on the iconic Tour de France climax on the cobbled streets of the French capital.

"Once you get one you want two, and now I have two I want a third on the Champs Elysees in Paris," said the diminutive sprinter who also won stage three at Sisteron.

"I'm happy to give the folks back home in Australia something to cheer," he said.

Ewan is a wily tactician, known for cool-headed analysis in the heat of the action, and he now has five Tour wins in total.

"I was really close to the front, I was more forward than I wanted to be, but I dropped back into the bunch to watch," the 26-year-old said.

"I just kept calm and waited for the right gap to open. I didn't know if I'd won because I threw the bike and was looking down.

The finish line at the Tour is equipped with cameras that can take thousands of images per second as with motor cycling's Grand Prix while each bike is equipped with a micro-chip, delivering instant results.

Ewan said it was too late for him to get involved in the race for the sprinters' jersey halfway through the race.

"I came to the Tour without the goal of the green, I have two stage wins so I can't complain. I'll be honest I don't want the added stress," he said.

Thursday's stage is the longest of the Tour, 218km from Chauvigny to Sarran Correze, and looks tailor made for an escape with three hills in the final half of the race.

Overall standings after stage 11 of the Tour de France from Chatelaillon-Plage to Poitiers on Wednesday:

We live in a world where facts and fiction get blurred
In times of uncertainty you need journalism you can trust. For only R75 per month, you have access to a world of in-depth analyses, investigative journalism, top opinions and a range of features. Journalism strengthens democracy. Invest in the future today.
Subscribe to News24
Related Links
Geraint Thomas disappointed by Tour de France snub - report
First black woman to summit Everest Khumalo attempts Guinness World Record for literacy
Ackermann makes it two from two in Tirreno-Adriatico
Next on Sport24
FIVE things you didn't know about Tour de France leader Adam Yates