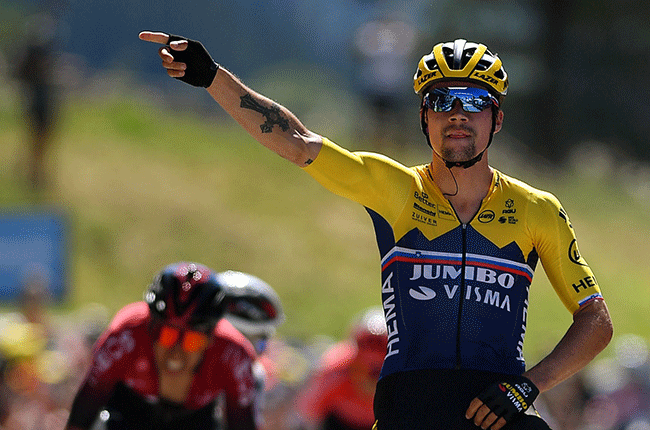 Rescheduled and rerouted, the Vuelta a Espana sets off from the Basque Country on Tuesday with defending champion Primoz Roglic vying for the winner's red jersey after his dramatic capitulation in the Tour de France.

Roglic looked set to win the Tour de France last month until the rider, who will turn 31 later in October, fell apart on a stunning penultimate day, opening the way for fellow Slovenian Tadej Pogacar to take victory.

Since then Roglic has restored some pride by winning the Belgian one-day classic Liege-Bastogne-Liege, profiting from Julian Alaphilippe's premature celebrations to nip past the Frenchman on the line.

Organiers of the Vuelta, the last of cycling's big three tours, have swatted away a series of disruptions from Covid-19.

The planned August start in the Netherlands was switched to 20 October in Spain and then a three-day foray into Portugal was slashed.

In a radical move, the Vuelta has banned the publicity caravan that precedes each stage and spectators will be barred from nine of the mountainsides where the travelling enthusiasts normally gather.

Facial recognition technology will be used instead of pens to reduce the risk of infection. Riders usually register with a signature, needing to use a pen and paper. Instead a computer will analyse the riders' physical characteristics.

Spain is battling one of the highest rates of coronavirus infection in the European Union, with nearly 900 000 infections and more than 33 000 deaths.

The 22 teams of eight riders will not venture further south than Madrid on a gruelling route of 2 882 kilometres that features eight hilly and five mountainous stages. A long and lonely individual time-trial could decide the winner.

Fears the stars would fail to show up have not materialised as Giro winners Tom Dumoulin and Richard Carapaz top the roster while climbers such as Spaniard Enric Mas and Frenchman Thibaut Pinot add to the lustre.

It will give fans the chance to see if the seven-time Grand Tour winner, who was dropped from Ineos' Tour de France lineup this year, is back on top form when two mountainous stages are followed by a draining individual time-trial mid-race.

It is the kind of contrasting terrain where Froome, now 35, once so often destroyed his rivals.

"It remains to be seen, I think it's possible," said Froome of his chances of victory. "It's been a very strange year, so who knows."

The 2020 Vuelta actually starts five days before the Giro d'Italia ends after a tightly packed rescheduling of the main races of the season because of the pandemic.

List of stages for the 2020 Vuelta a Espana cycling tour which starts at Irun in the Basque Country on Tuesday and ends in Madrid 11 November:

We live in a world where facts and fiction get blurred
In times of uncertainty you need journalism you can trust. For only R75 per month, you have access to a world of in-depth analyses, investigative journalism, top opinions and a range of features. Journalism strengthens democracy. Invest in the future today.
Subscribe to News24
Related Links
Almeida survives pink jersey scare as Geoghegan Hart wins Giro d'Italia stage 15
Van der Poel wins Tour of Flanders, Alaphilippe crashes into motorbike
Third Giro d'Italia stage win for Ganna, Almeida holds race lead
Next on Sport24
Cycling Tour of the Algarve postponed due to virus fears