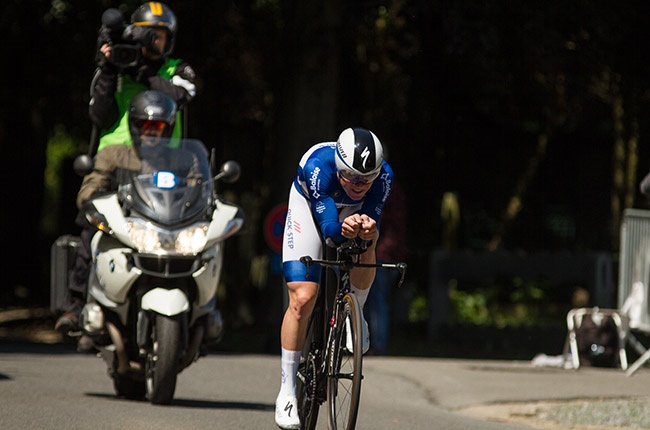 Remco Evenepoel launched a daring breakaway to claim a dominant victory on stage four of the Tour of Poland on Saturday and take over the race leader's jersey from reigning Giro d'Italia champion Richard Carapaz.

The 20-year-old Evenepoel burst free of the leading group around 50 kilometres from the finish and dedicated his win to Fabio Jakobsen, holding up the stricken Dutch cyclist's "75" bib number as he crossed the line in Bukowina Tarzanska.

Jakobsen awoke from a medically-induced coma Thursday following a horrific crash in the opening stage. Doctors have since said he will be able to return home soon.

Several riders took a tumble midway through Saturday's 152.9km stage, including Carapaz of Team Ineos. The Ecuadorian got back in the saddle but finished the day over three minutes behind.

Evenepoel, last week's Tour of Burgos winner, crossed the finish 1min 4sec clear of Jakob Fuglsang with Simon Yates and Rafal Majka another 34sec back of the young Belgian.

He heads into Sunday's concluding stage, a 188km route from Zakopane to Krakow, 1min 52sec ahead of Denmark's Fuglsang.

We live in a world where facts and fiction get blurred
In times of uncertainty you need journalism you can trust. For only R75 per month, you have access to a world of in-depth analyses, investigative journalism, top opinions and a range of features. Journalism strengthens democracy. Invest in the future today.
Subscribe to News24
Related Links
Belgium's Wout Van Aert sprints to Milan-San Remo victory
Roglic fires Tour de France warning to Bernal with Ain stage win
Dylan Groenewegen suspended after horror crash which left Tour of Poland rival in coma
Next on Sport24
Cavendish suffers broken ribs and collapsed lung in crash