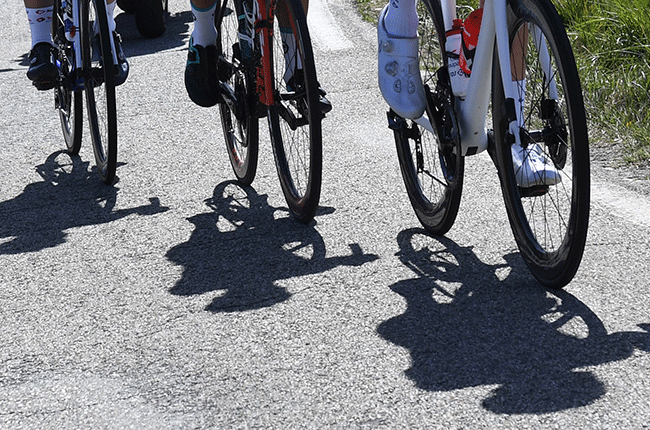 Dutch rookie Taco van der Hoorn held off a chasing pack in the final kilometre to win the third stage of the Giro d'Italia in Canale on Monday.

On his first Giro Van der Hoorn was part of a break that escaped the main pack five kilometres into the 190-kilometre stage.

With eight kilometres to go he accelerated away from the other survivor of the eight-man break, Swiss rider Simon Pellaud of Androni, and held off a disorganised pursuit.

He crossed the line with four seconds to spare, holding his hands to his head in a gesture of disbelief.

"After the finish I was thinking: 'is this real?" the Intermarche rider said on the podium.

The breakaway, which included Ukranian Andrii Ponomar, at 18 and eight months, the youngest Giro rider since 1929, disintegrated on the short sharp hills in the second half of the stage in the vineyards near Alba.

With the pack closing on the two survivors, Van der Hoorn and Pellaud kept riding.

"I didn't believe when we had one minute with 25k," said van der Hoorn. "I just think that 0.5 per cent, it's enough chance and I just take it."

After following the Swiss rider up the last climb, Van der Hoorn accelerated away and quickly stretched a 35 second lead to a minute.

"Simon was pulling me hard on the climb. I'm a bit heavier and I was struggling. But on the descent I was feeling much stronger," said Van der Hoorn. "I was thinking I have to go now and do a bit higher speed."

He was helped by a disorganised pursuit as the leading teams in the peloton waited for their rivals to do the work and close the gap.

"For me it was so surreal that I was there in front and the peloton was not coming back at me. I didn't believe it," said Van der Hoorn. "The (team radio) was saying 40 seconds, still 40 seconds. I was thinking 'Ah! maybe I really make it'."

The stage had only a small impact on the overall standings as Ganna increased his lead by three seconds to 16 seconds.

Edoardo Affini, an Italian with Jumbo-Visma who started the day closest to Ganna was one of the riders dropped on the climbs, allowing his Norwegian team-mate Tobias Foss to inherit second place.

Behind them are two Deceuninck riders, Belgian Remco Evenepoel and Portuguese Joao Almeida, both 20 seconds off the lead.

"I saw that Remco has fantastic legs," said Ganna. "It will be difficult for me to defend the pink jersey."

The other favourites, including former major tour winners Briton Simon Yates of Bike Exchange and Colombian Egan Bernal of Ineos, finished safely in the main pack.

The victory backed up the judgement of Van der Hoorn's team which says on their web site that he: "likes to race against the clock, against the wind and against the peloton."

On Tuesday, the fourth stage is a 187km ride south from Piacenza which ends with a second category climb into Sestola.

Results from stage 3 of the Giro d'Italia, a 190km run from Biella to Canale on Monday: