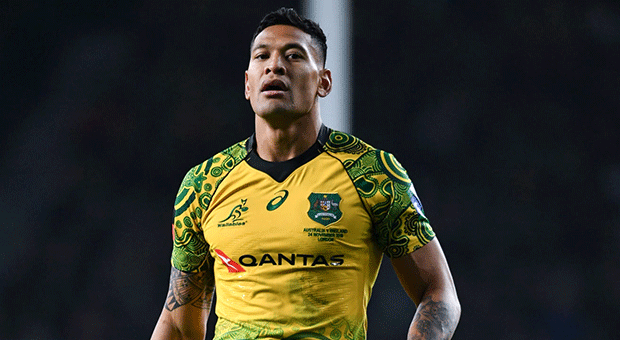 THOMAS RIDES LUCK, BACK AT NO 1

There is a new sheriff in town. Justin Thomas rode his luck to win the WGC-FedEx St. Jude Invitational on Sunday and reclaim the world No 1 spot he briefly held in 2018. Thomas picked up his 13th PGA Tour title meaning that there are only two players who have won 13 or more titles over the past 60 years at a younger age than Thomas ... Tiger Woods and Jack Nicklaus. Bet you didn't know that.

MYTWOCENTS VERDICT: Thomas had a few lucky bounces over the final few holes that saw him edge defending champ Brooks Koepka ... that said, you couldn't ask for a better confidence booster heading into the season's first major, the PGA Championship next week.

NO KNEE FOR ISRAEL

Controversial Israel Folau, who has never been shy to do things his way, has made headlines again ... this time for being the only player not to take a knee before a Super League match between St Helens and Catalans Dragons over the weekend.

MYTWOCENTS VERDICT: Folau was sacked by Rugby Australia a few years ago for saying that "hell awaits gay people" among other controversial and polarising comments and is now plying his trade in rugby league ... for his sins!

There is a rumour circulating in the media that Manchester United may look to resolve their goalkeeping "crisis" by tempting Kasper Schmeichel away from Leicester. Current keeper David de Gea has had a poor season, costing United at key moments, while Schmeichel has been in great form for Leicester ... consistently for a number of years.

MYTWOCENTS VERDICT: At this point, the rumours appear to be just that ... rumours. Manchester United already have another quality keeper in Dean Henderson on their books meaning that the Red Devils would most likely save their ammunition for other areas they need to strengthen. It's also unlikely that Leicester would easily part with their star keeper, especially as he has 3 years still left on his contract. It would make for a fairy tale story though as Kasper's dad Peter was a mainstay of Sir Alex Ferguson's legendary United teams in the 90's and 2000's.

We live in a world where facts and fiction get blurred
In times of uncertainty you need journalism you can trust. For only R75 per month, you have access to a world of in-depth analyses, investigative journalism, top opinions and a range of features. Journalism strengthens democracy. Invest in the future today.
Subscribe to News24
Related Links
Peter de Villiers recalls calling rugby writers 'rats' and 'deep agendas' in SA rugby
Israel Folau's 'personal choice' not to take knee, says Dragons coach
5 talking points: Super Rugby Aotearoa Week 8
Next on Sport24
Britain's Geoghegan Hart wins Giro d'Italia