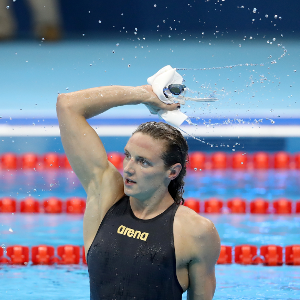 "It is always a special feeling to be on the blocks before a home crowd," the 28-year-old told local website Index.hu in the gleaming new meet venue the Duna Arena where she has been training for months.

"I will know each and every little tile here in the ground, they will greet me, and I will them. This is the advantage of the home track," she said.

After the Rio Olympics last year, where Hosszu won three gold medals and a silver, she said Budapest was "the obvious next stop to get motivated for".

Hosszu will compete in the 200m and 400m individual medleys, 100m and 200m backstroke, 200m freestyle and 200m butterfly, just as at the last world championships in Kazan, Russia.

Few would bet against her at least matching the two individual medley golds she won in Kazan, although Hosszu admitted to a degree of hometown pressure.

"This pool is so beautiful, that it also puts a little pressure on us Hungarians, now we all have to swim fast for sure," she said.

Currently Hungary's most successful sports star, she is also the first ever race-prize dollar millionaire swimmer, a testament to her shrewd grasp of earning potential and marketing as well as her talent.

One of the few swimmers to have her own swimsuit brand - "Iron Lady" of course - she also holds live conferences with her half a million fans on Facebook.

Her fortunes turned soon after a disastrous London Olympic Games in which she missed out on podium finishes despite high expectations.

"I was so nervous about what would happen if I lost and didn't get a medal," she admitted.

Her then boyfriend now husband Shane Tusup, who she met when both were swimming at the University of Southern California, took over as coach soon after.

Tusup's intense, emotional reactions to Hosszu's races have become an internet sensation, with NBC's official Olympics Twitter account urging women to 'find someone who loves you the way Katinka Hosszu's husband loves her'.

"London was a milestone in my life, I realised then that mental preparation can be done differently... I don't believe the impossible exists, if the road to success is well built," said Hosszu.

The couple closed ranks, however, when it came to criticism of Tusup's intensive training methods, with some swimming insiders suggesting that they constituted abuse, a claim fiercely rejected by Hosszu.

She shattered the world record in her first event the 400m IM, won gold in the 100m backstroke, and managed an Olympic record the 200m IM.

Her response to some not-so-veiled suggestions that her improvement since London was not due solely to hard work was met with now trademark defiance.

A court in the US publication's home state threw out the case on free speech grounds but Hosszu remained unabashed.

Nor has she been shy about confronting the swimming establishments, at home and abroad.

Last year she twice won disputes with the powerful Hungarian swimming federation, forcing the resignations of both its head coach and president.

This year FINA itself has been in Hosszu's sights.

In a Facebook post she accused the body of not fairly distributing television revenues to athletes, restricting their commercial opportunities, and creating "destructive rules" like limiting the number of World Cup disciplines a swimmer can compete in.

Then days before the start of the Budapest meet, she launched a pro swimming union (GAPS) backed by 14 other Olympic champions, and called on FINA to "sit down and start talking to us... as equal partners".

We live in a world where facts and fiction get blurred
In times of uncertainty you need journalism you can trust. For only R75 per month, you have access to a world of in-depth analyses, investigative journalism, top opinions and a range of features. Journalism strengthens democracy. Invest in the future today.
Subscribe to News24
Related Links
Sun looks to fry Aussie Horton in grudge return
Ledecky leads US at Budapest worlds
New dad Lochte postpones competitive return
Next on Sport24
SA end FINA World Champs with two medals