Walking back to happiness - Diniz enjoys golden moment at last 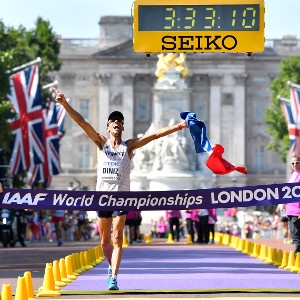 London - Mercurial Frenchman Yohann Diniz finally secured the global title that had frustratingly eluded him when he won men's 50 kilometres walk world championship gold at the sixth attempt on Sunday.

The 39-year-old, who is the oldest winner of the event, was even able to enjoy his version of the royal wave down The Mall leading from Buckingham Palace after leaving his rivals trailing from an early stage of the gruelling event.

Diniz spent so much time celebrating with spectators close to the finish that he missed the opportunity to eclipse his own world best mark as he finished in 3 hours 33 minutes 12 seconds - 39 seconds short of his mark from Zurich in 2014 when he won the third of three European titles, but still the second fastest time in history and a championship record.

It was a far happier outcome than his experience in the 2012 Olympics where he was disqualified before being pictured disconsolately leaning on a tree in The Mall, or last year's Rio Games where he collapsed twice before bravely finishing eighth.

However, Diniz, who was also disqualified in the 2008 Olympics, confessed to having to pull himself together at one point when he received a warning.

"I started having doubts after 20km," said Diniz, whose previous best perfomance was silver in the 2007 championships.

"I got a card around 20km too and I thought, 'I just must not mess this up'. I just concentrated completely on my technique."

Diniz, who gave France their third gold medal of the championships, said he had purposely avoided watching Saturday's action.

"A lot of training has gone into this - cycling, swimming - everything for this 50km walk. Last night I kept away from watching the TV (athletics) because I did not want to get too excited. I went to bed at 9pm because I knew it was going to be my day today."

Despite his advancing years, Diniz said he was likely to carry on and have one last tilt at winning the only major title that has eluded him - the Olympic gold.

"It is a lovely Sunday afternoon. I know you should never take any decision when you are hot," he said.

"I am still missing one (title) and that is the Olympic one. It would be a nice way to finish in Tokyo."

The women's race made its debut at the championships - with just seven competitors - and was won by Ines Henriques of Portugal breaking her own world record, timing 4:05.56.

The women's other race - the 20km - had a dramatic climax with Jiayu Yang winning gold after compatriot Lyu Xiuzhi was disqualified just seconds from the line.

Colombian Eider Arevalo won the men's 20km with third placed Caio Bonfim making walking history for Brazil in delivering them their first medal in the event.

We live in a world where facts and fiction get blurred
In times of uncertainty you need journalism you can trust. For 14 free days, you can have access to a world of in-depth analyses, investigative journalism, top opinions and a range of features. Journalism strengthens democracy. Invest in the future today. Thereafter you will be billed R75 per month. You can cancel anytime and if you cancel within 14 days you won't be billed.
Subscribe to News24
Related Links
Organisers to blame for Bolt's collapse - team-mates
Shange misses out on medals, breaks national record
Next on Sport24
Shange misses out on medals, breaks national record