According to SASCOC’s official website, Buis joined Charl du Toit and Ilse Hayes as a double medal winner as he added T38 400m gold to his long jump bronze, while Langenhoven loped to silver in the T12 200m in a time of 22.43.

Making it even better a day for Buis was the fact that his 49.46sec win was a Paralympic record.

“It was quite emotional for me out there because I knew we’d worked hard this season,” said Buis. “It was marvellous. My lane draw was perfect and I fed on the runners in front of me - especially the Tunisian and Chinese guy, and then the last 200m I attacked.

“I have to give credit to coach Suzanne Ferreira and the team around me like the physios, stakeholders and my gym coach.

“Tonight I also wanted to run for my wife Erna and little daughter, Jinne, which was huge motivation.

“As for the future I’m just going to take it as it comes. I’m not thinking of quitting right now but I also have to focus on my teaching career… I need a job right now, so come on guys, if there’s anyone listening out there.

“I’ll go home a very happy man. The last four years weren’t the easiest of my life but I’m just happy that it all worked well today.”

Some trivia pertinent to Saturday’s celebration was that Buis attended Hoërskool Langenhoven in Riversdale!

Just as happy was ‘veteran’ Langenhoven after his Games had started off with the disappointment of disqualification in the 400m. He was beaten to gold by Cuba’s Leinier Savon Pineda who won in 22.23.

“I’m delighted to end off the Games for me with a silver… This was going to be my last race but now I’m thinking of World Champs next year where I’ll focus on the long jump.

“It was a bit disappointing start to the Games with that disqualification but  now I’m chuffed, and I’ll take a silver any day… we hadn’t really focused on the 200m - it was more for speed-endurance for that 400m.

“But gold and silver for me is fantastic… I’ve got seven Paralympic medals now so you can say that I’m in seventh heaven!’

As for the future?

“Well, we’ll take it to forward the Commonwealth Games and thinking even further ahead, if long jump is part of the schedule in Tokyo… why not,” he laughed.

Also in action on Saturday evening was Mpumi Mhlongo in the men’s T44 long jump where he ended sixth with a personal best 6.79m.

“Sadly I only had one jump in which was my safety jump to get into the top eight and after that I must have stepped over by 1cm each time as I only fouled with a spike mark once.

“It was amazing to see the record-breaking Markus Rehm do what he is best known for and the growth of my fellow competitors. My highlight of the night is being able to share Dyan’s gold medal moment with him as he took his victory lap.

“To all the support back home, friends, family and strangers, you have warmed many of our hearts here in Rio. To the management (SASCOC) and medical staff, thank you for making Rio 2016 a reality.’

There is just one competitor is still in action, fittingly it’s one of the team’s stalwarts, seven-time Paralympian Ernst van Dyk in the T54. Already with one gold medal in the bag (road race), here’s hoping the big guy can end it all on a high!

We live in a world where facts and fiction get blurred
In times of uncertainty you need journalism you can trust. For only R75 per month, you have access to a world of in-depth analyses, investigative journalism, top opinions and a range of features. Journalism strengthens democracy. Invest in the future today.
Subscribe to News24
Related Links
Iranian cyclist dies after crash in Paralympics
Paralympians raise their game
Hamman claims javelin gold in Rio
Next on Sport24
Heavyweight champion Joshua to face Pulev in first fight in year 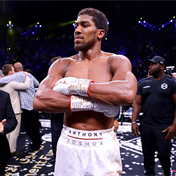