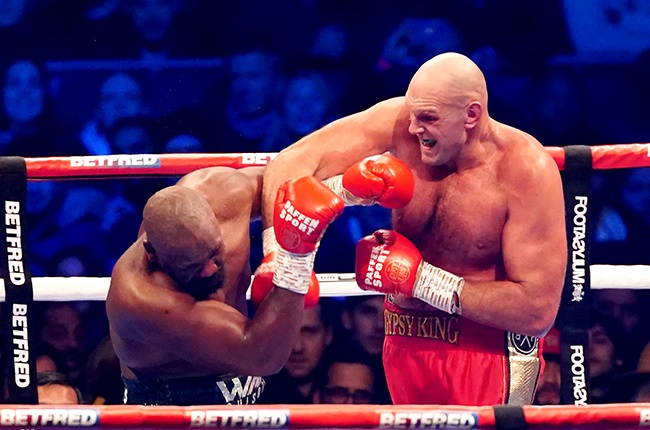 Tyson Fury retained his World Boxing Council heavyweight title with a decisive stoppage win over British rival Derek Chisora on Saturday before setting his sights on a blockbuster unification bout against Oleksandr Usyk.

Fury, still unbeaten as a professional, dominated from the start, and with Chisora's eyes starting to close, referee Victor Loughlin stopped the fight nine seconds before the end of the 10th round at the Tottenham Hotspur Stadium.

Usyk was at ringside on Saturday as he returned to the venue where he deprived Britain's Anthony Joshua of all those titles in September last year before defeating him again in Jeddah this July.

Soon after Fury's hand was raised in victory, he was involved in a ringside face-off with Usyk as the Ukrainian entered the ring.

Fury, after thanking a crowd of some 60,000 and paying tribute to his beaten opponent by leading spectators in a chant of "One Derek Chisora, turned his attention to Usyk with British heavyweight Joe Joyce also coming onto the ring apron.

"Usyk, you're next, you 15 stone little body building midget. I've done one Ukrainian, (Wladimir) Klitchsko, let's get it on," Fury told BT Sport.

Usyk remained silent, with Chisora adding: "Thank you Tyson, I really appreciate that. We are friends.

"There's a big fight coming, everyone wants to see one champion in the heavyweight division."

Fury, meanwhile, then turned his attention to Joyce.

Fury's only previous fight this year was a sixth-round stoppage of Dillian Whyte at Wembley in April.

"I felt good, I needed some rounds, I haven't boxed since April," said Fury. "I was landing good punches. But take nothing from Del Boy (Chisora), it was a pleasure to fight tonight, he is a British folk hero."

After the Whyte fight, Fury announced his retirement only for the lure of the ring to prove too strong.

Fury was an overwhelming favourite to beat Chisora given he'd defeated him convincingly in their two previous bouts, including a 10th-round stoppage when they last met eight years ago.

Nevertheless the 38-year-old Chisora has won respect throughout a now 46-fight career for his ability to take a punch.

This week marked the seven-year anniversary of Fury's stunning success over Wladimir Klitschko that saw him first become world champion but also sparked a major mental health crisis before a triumphant return to the ring.

Fury, ahead of Saturday's bout, proclaimed himself now capable of inflicting "maximum damage" as never before after working with trainer SugarHill Steward, the nephew of Lennox Lewis' former trainer, the late Emanuel Steward.

On a bitterly cold night at the home of Premier League football club Tottenham, Fury jogged rather than walked into the ring.

The champion, at 6ft 9in (2.06 metres) also significantly taller than Chisora, took command in the centre of the ring and was rarely troubled.

It seemed just a matter of time before Fury won, with Loughlin speaking to Chisora's corner at the end of the ninth before calling a halt soon afterwards.

We live in a world where facts and fiction get blurred
In times of uncertainty you need journalism you can trust. For 14 free days, you can have access to a world of in-depth analyses, investigative journalism, top opinions and a range of features. Journalism strengthens democracy. Invest in the future today. Thereafter you will be billed R75 per month. You can cancel anytime and if you cancel within 14 days you won't be billed.
Subscribe to News24
Next on Sport
Ex-boxing referee admits cheating to help Pacquiao win fight 22 years ago