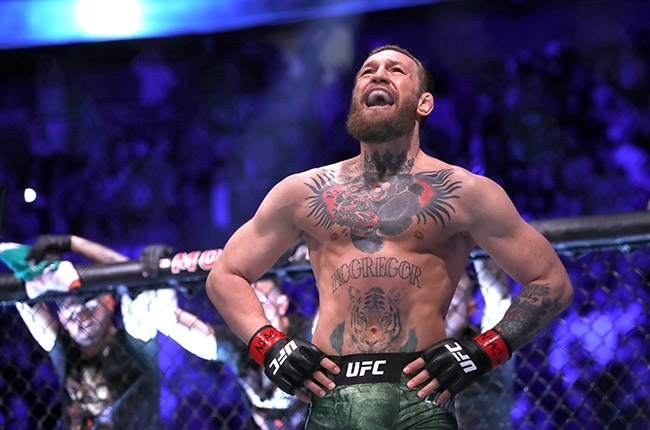 Conor McGregor waits for the start of his welterweight bout against Donald Cerrone during UFC246 at T-Mobile Arena on 18 January 2020 in Las Vegas, Nevada. (Photo by Steve Marcus/Getty Images)
Steve Marcus

Manny Pacquiao is mulling a possible fight with Irish mixed martial arts star Conor McGregor as he plots his return to the ring, representatives for the Filipino boxing icon told AFP on Friday.

Sean Gibbons, president of Manny Pacquiao Promotions, told AFP in an email a fight between the eight-division world champion and McGregor would be a "tremendous global event."

Pacquiao, 41, has not fought since claiming the WBA welterweight crown with a stunning victory over Keith Thurman in Las Vegas in July last year.

A bout against McGregor, who fought welterweight king Floyd Mayweather in a money-spinning 2017 fight, would guarantee Pacquiao another lucrative payday.

Pacquiao has successfully combined a political career in the Philippines, where he is an elected senator, while continuing to box at the highest level.

Gibbons said that the two camps were a "long way" from agreeing a fight, but confirmed "it is (definitely) one of the fights being considered for the Senator's return in 2020."

"The idea has been brought up on a few occasions for Senator Pacquiao and Conor McGregor to fight," Gibbons said, adding that McGregor had shown in his fight with Mayweather he was capable of challenging "the best boxers in the world."

Earlier Friday, McGregor, who has a long history of making outlandish claims on social media, had said on Twitter he was "boxing Manny Pacquiao next in the Middle East."

"It will be a true honour to have faced two of the greatest boxers of the modern era," he added.

In a report on ESPN, meanwhile, McGregor's manager Audie Attar said serious talks about a Pacquiao fight were under way, with a possible December or January date in the Middle East under consideration.

We live in a world where facts and fiction get blurred
In times of uncertainty you need journalism you can trust. For only R75 per month, you have access to a world of in-depth analyses, investigative journalism, top opinions and a range of features. Journalism strengthens democracy. Invest in the future today.
Subscribe to News24
Related Links
Boxing, mental health coach for Australia's 'bubble' cricketers
OPINION | CSA's transformation blueprint must heed calls of players
Warner fears virus could scupper Melbourne Boxing Day Test
Next on Sport24
'I promised my mother': MMA champion Nurmagomedov in shock retirement