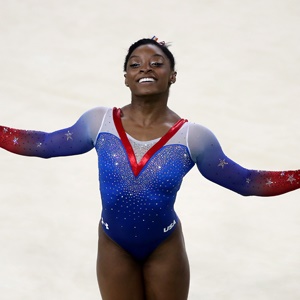 Cape Town - Simone Biles was one of the stories of the 2016 Rio Olympics.

She was a part of the 'Famous Five' - the nickname given the US women's gymnastics team that won gold - and she went on to win three further individual golds at the Games in the all-round, vault and floor disciplines.

Biles also won a bronze in the balance beam, and her 19 combined medals in the Olympics and World Championships make her the most decorated American gymnast of all time.

But, as is often the case when it comes to world champions, Biles' story is not a simple one.

Born in Ohio in 1997, her childhood was problematic.

Her mother had a substance abuse problem and could not care for her children and, as a result, Biles was placed in a foster home at the age of 3 along with her 3 siblings.

Eventually, Biles and her younger sister - Adria - moved in with their grandparents, who adopted them.

It was an 'out' that gave Biles the platform to have something resembling a normal childhood.

At the age of 6, she was discovered by a trainer on a day-care field trip to the local gymnastics centre.

According to Biles, she immediately started mimicking the gymnasts who were training and she was "noticed".

The rest, as they say, is history and Biles has become a role model for thousands of young girls and women throughout the USA and the world.

But, when asked about the role that her testing upbringing played in her ultimate success, Biles chooses not to be a victim.

And that is her message to the youth of South Africa, many of whom come from broken homes themselves. It is a message of hope and of taking hold of your own destiny.

"I would remind them that it doesn't matter where you come from. It's where you want to go ... with where you've come from," she said via a conference call hosted by Laureus.

"I think everyone makes this story (her coming from a broken home) a little bit more sad than it is.

"To me, it was just falling in love with the sport and having a passion and seeing how far I could take it with myself. It didn't have anything to do with where I came from, it was just about what I was born with and what I was able to do with the talent I was given."

Biles is nominated alongside Katie Ledecky, Allyson Felix, Angelique Kerber, Elaine Thompson and Laura Kenny for the Sportswoman of the Year award at next month's Laureus World Sports Awards.

Since her Rio success, Biles has become a global media sensation. She has visited the Obamas at the White House, has launched a book and has told her story countless times.

"My life has changed quite a bit. Everywhere I go, people recognise me," she said.

She is on a break from the sport at the moment, and while she has plans to compete at Tokyo 2020, she knows a lot can happen between now and then.

Before any of that, Biles can join the likes of Serena Williams, Genzebe Dibaba, Missy Franklin, Yelena Isinbayeva and Cathy Freeman on the list of sportswomen to be honoured by Laureus.

"It means a lot to be picked from the best of the best because it's not a normal collection. It's everyone that has achieved and accomplished so much in their sport and made a huge impact, so it is an honour," Biles said.

"One day you do hope to be the best in the sport, that's what we strive for. To be nominated makes you feel like you've made your mark."

We live in a world where facts and fiction get blurred
In times of uncertainty you need journalism you can trust. For only R75 per month, you have access to a world of in-depth analyses, investigative journalism, top opinions and a range of features. Journalism strengthens democracy. Invest in the future today.
Subscribe to News24
Related Links
Reaching beyond the finishing line
28 Russians face action over Sochi doping
Wayde: The Lord has shown me greatness
Next on Sport24
Trainer Elliott's hearing set as he loses horses over photo scandal