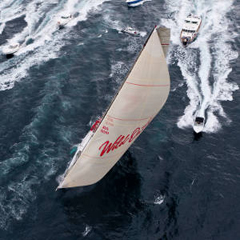 Sydney - Australia's gruelling Sydney to Hobart race faces choppy seas and high winds that "pack a punch" after it gets underway on Saturday with a record 27 international entries among those vying for honours.

The fleet for the 71st edition of the often brutal 628 nautical mile (1 163km) bluewater classic stands at 109 and includes the 100-foot supermaxi Wild Oats XI which won line honours for an eighth time last year.

It will once again be going head-to-head with American super-yacht Comanche, owned by Netscape founder Jim Clark and wife Kristy Hinze, which was runner-up in 2014.

In a weather update on Thursday, meteorologists forecast choppy seas outside Sydney Heads at the start with a southerly blowing up to 35 knots and rough conditions as the fleet spends its first night at sea.

"It's not a really strong one, but it does pack a fair bit of punch with it," New South Wales Bureau of Meteorology's Michael Loganhe said.

"It does fringe into the lower end of the gale warning category. It will make for rough conditions, it's setting up for quite an eventful first night."

Storms are part and parcel of the race with six men dying, five boats sinking and 55 sailors rescued on a fatal night in 1998 when a deep depression exploded over the fleet in the treacherous Bass Strait.

Comanche's navigator Stan Honey said he preferred wild weather to no wind, believing it will be one of the only ways to beat Wild Oats XI, which has undergone a radical transformation, including adding a new bow section.

"We're preparing for the full range of forecasts that we've seen," he said.

"And we're looking forward to racing in any of them, except potentially we would not be eager to race in the scenarios that have a 12-hour or more period of very light air because that's not a condition that suits us best."

Despite the race featuring a handful of 100-footers, Wild Oats XI skipper Mark Richards knows Comanche, which set a new 24-hour monohull record of 618.01 nautical miles in July, is his main threat.

"No question Comanche's going to be the one to beat," he said.

"She wrapped up the 24-hour world record this year. If she gets the conditions, she'll be very tough to beat."

Among the entries, 27 are from overseas, including 16 from Britain, and others from the United States, Japan, Germany, Belgium, the Netherlands, Switzerland and, for the first time, mainland China.

Ark323 joins Shuguang Haiyang as the first ever mainland Chinese entries, with ocean sailing a sport on the rise in China.

"We're a bit nervous because it's so well known as the most difficult and challenging race in the world," said Ark323 crew member Calvin Zhou, representing the Shanghai-based Noahs Sailing Club.

The race will be poignant for the team after fellow crew member Sai Jun was lost overboard off the coast of Vietnam in October while en-route to Australia.

Among others competitors will be Italy's Giovanni Soldini, who will skipper Maserati with a crew that includes Pierre Casiraghi, grandson of Monaco's late Prince Rainier and Grace Kelly.

"On the one hand, I'm excited by the challenge that lies ahead, I think it's probably in my personality to confront any challenge and try and make the most of that opportunity," said Clarke.

"But on the other hand there's certainly nerves and a bit of fear there and I'm petrified by sharks."

We live in a world where facts and fiction get blurred
In times of uncertainty you need journalism you can trust. For only R75 per month, you have access to a world of in-depth analyses, investigative journalism, top opinions and a range of features. Journalism strengthens democracy. Invest in the future today.
Subscribe to News24
Related Links
America's Cup fallout continues
Ainslie rescued by Branson
Dead yachtsman identified
Next on Sport24
OPINION | LeBron James is the GOAT, end of story 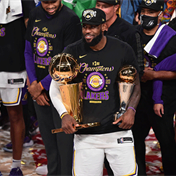