It was 20 years ago this week that legendary Manchester United footballer Ryan Giggs, now coach of Wales, was sitting in the audience at the inaugural Laureus World Sports Awards in Monaco, waiting, with his manager Sir Alex Ferguson, to receive the very first Laureus World Team of the Year Award.

At that moment, walking on to the stage unexpectedly, came probably the most admired man in the world, Nelson Mandela.

According to Giggs, re-living the moment with Laureus.com, the entire audience of celebrities from sport and show business were transfixed as he made the speech which has reverberated over the last two decades ... ‘Sport has the power to change the world, it has the power to inspire. It has the power to unite people in a way that little else.’

As Giggs recalls: “The speech was monumental. He spoke in a soft manner, but his words were louder than anyone I’d ever heard before. He had a way of communicating to everyone. It was an amazing thing to be part of, because of course Laureus was just starting out then.

“There were heroes of mine in the audience that I grew up watching, Ed Moses, Daley Thompson, Michael Johnson, and Sylvester Stallone was among the many Hollywood names. They were all watching and listening to what Nelson Mandela was saying.”

The speech proved to be the catalyst for the creation of Laureus Sport for Good and the Laureus World Sports Academy, of which, 20 years on, Giggs is now himself a member.

Before Monaco, Giggs had met President Mandela twice when Manchester United were on tour in South Africa, the first time was in 1992.

He says: “He hadn’t long been out of prison and it was an amazing moment for me and the whole team. I was being rested for the match we were playing, which was lucky, because just before the game was about to begin we had had an invitation to Nelson Mandela's box.

“I spent the whole game with Nelson Mandela: Manchester United v Kaizer Chiefs. It was one of the most amazing moments of my career. An unbelievable experience. He was a genuine football fan, so he knew the majority of the United players. It happens quite a bit when you meet your heroes. You want to ask them questions, and then they're firing questions at you!”

President Mandela and Giggs have something unique in common which not many people know. They both have been given the Freedom of Salford, near Manchester.

“Salford is where I live and where I grew up. I was given the freedom of the city in 2009 and the previous person to receive it was Nelson Mandela. So I had a little smile to myself when I was getting inducted and that was brought up. So two things we have in common: our love for football and we both have the freedom of Salford.”

The other connection between the two, of course is Laureus. President Mandela became the first Patron of Laureus and Giggs is now a proud Academy Member. “At the time of the first Awards I was probably 28, so was at the peak of my career, so it wasn't something that I was thinking of at the time, but being an Academy Member is fantastic. It’s a great honour.

“Sir Bobby Charlton introduced me to Laureus and I'm massively proud to be associated with Laureus because obviously I know the good work that Sir Bobby has done over the years and he was someone who I looked up to, at Manchester United.

“I've been on a couple of Laureus visits, one in Thailand and one in South Africa. The one in South Africa was special because obviously it was with, underprivileged children, children who have nothing, but they love football. They were all different ages. And we joined in, a bit of head tennis, a few skills, seeing what these young kids skills are like. And they're fantastic. It’s amazing when you get the football out and it brings everyone together.

“It’s great that you can see first hand the great work that Laureus is doing and the different projects, whether it be raising awareness, whether it be bringing a new facility to the area to help underprivileged children and families. It does leave a lasting effect on you that you see first-hand, the problems and the troubles. Things we just take for granted: hot water, clean water, where you live, the medical treatment that you receive. These visits always stay with you for a long time.

“I think that’s even more relevant regarding the circumstances that the world finds itself in at the moment. When we start coming out of lockdown and Covid-19 there are going to be communities and countries that will need our help more than ever. So I think there will be a real big push so that Laureus can help the people who need it most,” added Giggs.

The Laureus World Sports Awards is the premier global sporting awards. First held in 2000, the annual event honours the greatest and most inspirational sporting triumphs of the year and showcases the work of Laureus Sport for Good. Since 2000, the Laureus World Sports Awards has been held in Monaco, Lisbon, Estoril, Barcelona, St Petersburg, Abu Dhabi, London, Rio de Janeiro, Kuala Lumpur, Shanghai and Berlin. 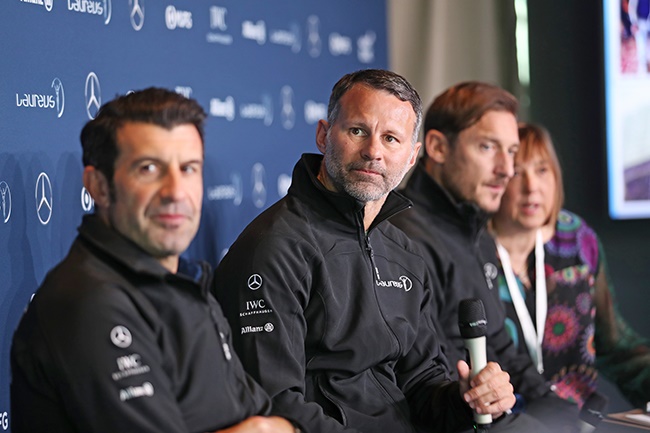