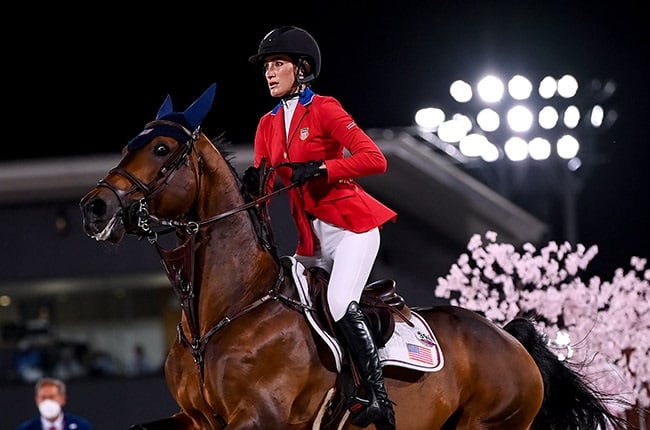 Jessica Springsteen - the daughter of US rock star Bruce Springsteen - has added her name to the list of offspring of the super rich who have strutted their stuff on the Olympic equestrian stage.

Springsteen fell short in qualifying for Wednesday's individual jumping final on her horse Don Juan van de Donkhoeve but still has the team event to look forward to later in the week in Tokyo.

"My horse jumped unbelievable. I really couldn't be happier with him," said the 29-year-old daughter of the "Boss" and his E Street Band wife Patti Scialfa.

Springsteen confessed to a bout of nerves before competing in Tokyo on Tuesday.

"It's not only my first Olympics, but also my first championships," she said. "You definitely feel a little bit more jitters going in, but to be on a team with Kent (Farrington) and McLain (Ward) and Laura (Kraut), who have such incredible experience, I felt really confident."

Springsteen is not the first equestrian competitor with famous parents to compete at the Olympics.

The field in Tokyo also includes Egypt's Nayel Nassar, shortly to be the son-in-law of billionaire philanthropist Bill Gates.

"I'm rooting for lots of the athletes in Tokyo right now - but none more than my soon-to-be son-in-law, @nayelnassar. Good luck, Nayel!" Gates posted on Instagram.

Choose your newsletters
Voting Booth
After the opening weekend of URC action, what did you make of the South African struggles?
Please select an option Oops! Something went wrong, please try again later.
It exposed the quality of South African rugby...
40% - 429 votes
There were positives to take
7% - 80 votes
We shouldn't read too much into one weekend
17% - 179 votes
It will take the SA sides time to adjust to the new competition
36% - 386 votes
Previous Results
Showmax
Stream SuperSport United vs Kaizer Chiefs