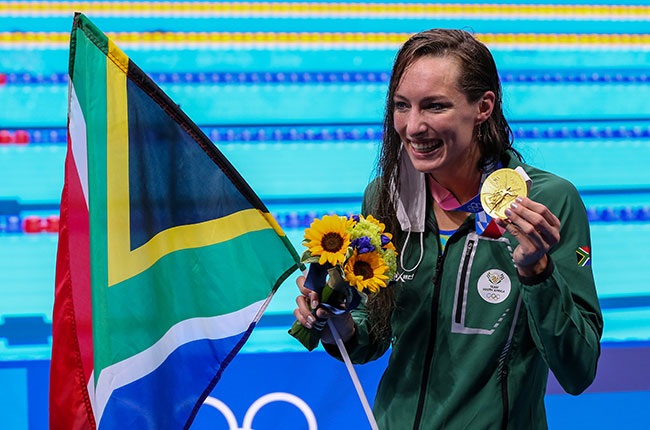 Mthethwa announced that each gold medallist for the Olympics and Paralympics would receive R450 000, while their coaches would get R120 000.

Schoenmaker won gold and silver in the pool in Japan last month and broke the 200m women’s breaststroke world record with a time of 2:18.95.

Schoenmaker's fellow stellar achiever Bianca Buitendag, who scooped surfing silver, will be rewarded with R220 000 for her performance.

The pair's medals were Team SA's only medals at the Games, a significant drop from the 10 medals netted in Rio 2016.

The country was recently uproar after it emerged that there could be no incentive bonuses for the Tokyo medallists.

It would have been a sharp deviation from Rio, where the likes of Caster Semenya and Wayde van Niekerk pocketed R500 000 for their gold medals.

But Sascoc blamed the furore on "miscommunication". Mthethwa emphasised that bonuses would be a permanent fixture for future Games.

"We can improve communication. When Sascoc said they'd exhausted their budget, that was correct, but that was before Sascoc, and the ministry had looked into the actual incentives," said Mthethwa.

"Incentives will be there; this should not be a question going forward. It's a permanent feature, depending on the kind of economic climate.

"But we are bound to incentivise excellence based on our own programmes and annual performance plans.

"We have started a custom, and there is no way we will renege from it. The confusion was caused by some people saying there are going to be no incentives even after [Tokyo]. But we announced that it will be there, but we didn't get into detail."