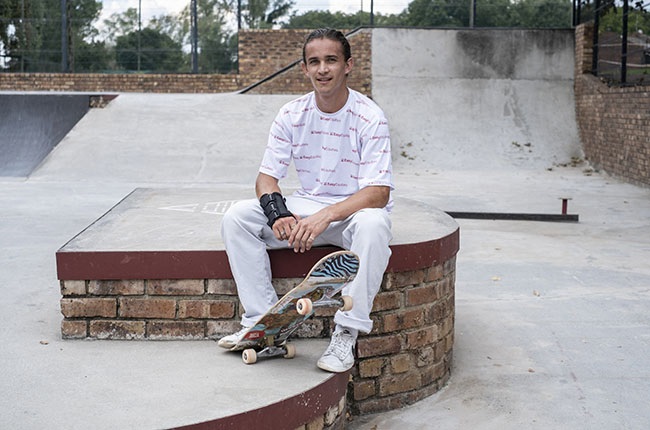 As other skateboarders paused to catch their breath, South African Olympic aspirant Brandon Valjalo moved ahead and sped down the next ramp, slid along a rail and spun into the air.

Landing gracefully on his feet, the 22-year-old was visibly dissatisfied with his technique and went back for another round.

Young athletes, some shirtless, launched themselves skyward, spinning and slamming the concrete as a small crowd cheered from behind a meshed fence.

Valjalo, wavy blonde hair pulled back in a ponytail, was the main attraction.

He is just two events away from representing South Africa at the upcoming Tokyo Olympics, where skateboarding will feature for the first time as a medal sport.

The qualification process, paused for a year due to the coronavirus pandemic, is set to resume in May.

Spots are guaranteed for the world's top 20 - a far distance from Valjalo's 49th place.

But the skateboarder is still "pretty confident" he will make the Olympics roster.

As the number one in Africa, he is likely to qualify as the continent's representative regardless of his global ranking.

Valjalo first stood on a board at the age of three, when he found his brother's old skateboard in the garage.

At nine years old he developed a passion for the renegade sport that has thrived on American and European sidewalks since the 1960s.

Skateboarding is "the freedom of doing anything that you want", Valjalo told AFP.

"Everyday you forget that you are doing it, because you love it," he said with a smile.

Valjalo entered his first professional competition in 2013, aged 14, and won a championship a year later.

With trophy after trophy, Valjalo worked his way up to winning the African championships in 2017, which earned him invitations to compete against the European elite.

Representing South Africa at the Olympics will be an "honour", said the athlete, who looks up to basketball star LeBron James and footballer Cristiano Ronaldo.

"Ever since I was a young kid I wanted to reach the pinnacle of competitive skateboarding," he beamed.

Valjalo has trained at skateparks across the world, from California to his own back yard.

But it is the "crusty" South African streets that honed his skills.

He compared it to training on sand to run faster on grass.

Skateboarders disagree on whether the discipline should be treated as a competitive sport or left to the street, where it first originated.

But Valjalo argued "artistic" street boarding and competitions were both important, adding that the Olympics would give the sport more visibility.

"They saw this... have so much spectator value and [it's] so entertaining for people to watch," said Valjalo, who has 28 000 followers on Instagram.

The games will also erase the image of skateboarders as "outcasts that love to go to parks and smoke weed," he added, and give it a stamp of approval "as a real job".

We live in a world where facts and fiction get blurred
In times of uncertainty you need journalism you can trust. For only R75 per month, you have access to a world of in-depth analyses, investigative journalism, top opinions and a range of features. Journalism strengthens democracy. Invest in the future today.
Subscribe to News24
Next on Sport24
Garrick Higgo 'excited' for Tokyo Olympics, aims to improve even further