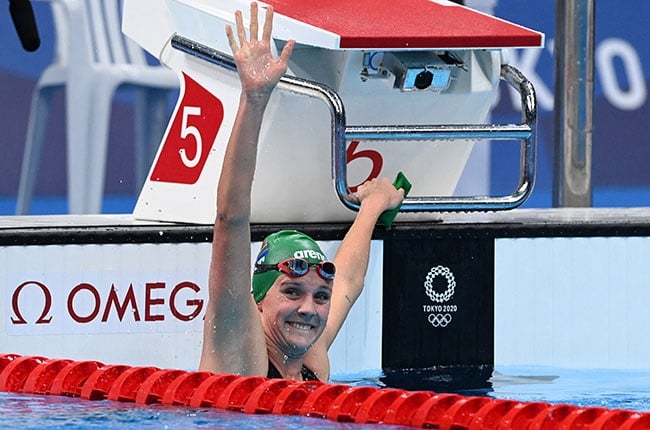 South African star swimmer Kaylene Corbett insists an Olympic medal is not on her mind as she prepares for the biggest final of her life.

Corbett surprised many as the South African achieved a personal best in both the heats and semi-finals of the women's 200m breaststroke.

On Thursday, the 22-year-old booked her place in her first Olympic final after improving her personal best by 0.40 seconds to stop the clock in 2:22.08.

Corbett will be joined by fellow compatriot and silver medallist Tatjana Schoenmaker in the 200m breaststroke final as they became the first SA female swimmers to make the same final in 21 years.

The star breaststroke duo are both coached by TuksSwimming head coach Rocco Meiring.

Corbett, who made her Olympic debut earlier this week, hasn't shown any signs of nerves as she went "over above" from what she expected.

"God is just going over and above from what I expected from this meet. I'm just over the moon.

"Rocco says we need to set the pace and you need to hold it so setting it up correctly and not going too fast. I'm pacing it quite well at the moment."

Corbett insists her job is "just about done" after not only achieving her goal of making a personal best but competing in an Olympic final.

"I'm not thinking of that yet. If you're swimming at this stage, you're just out there to swim a PB and race in your own race and if I'm blessed with a medal, then that's incredible," said Corbett.

"So whatever happens tomorrow, I'm definitely not looking at medals yet. I was just hoping for the final, I've done what I needed to do and I'm just ecstatic to be in the race for tomorrow."

"I'm so overwhelmed with what's happening back home with the amount of people that have reached out," she said.

"I didn't think I've ever felt this much love and support. Like Nelson Mandela says, we just hope we can swim and unite our nation and hopefully, we can add a little hope with South Africa."