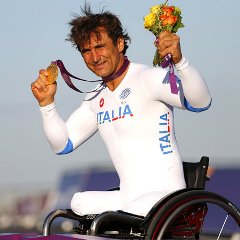 The 39-year-old from Ceres, who took the lead with a couple of kilometres to go, was beaten by a fraction of a second by former F1 racing driver Alessandro Zanardi.

The Italian, who lost both legs in a CART series (American Champ Cars) accident in 2001, clocked 2:00.32 in the 64km race at Brands Hatch, earning his second gold medal at the London Games.

“Zanardi is a smart racer and he knew if he took my wheel, he would probably get out in front of me,” said Van Dyk.

“When he came past me, he came with a lot of power and I was running low because I’d been in front for quite a bit. But that’s the risk you take when you go out in front and I’m just happy to come away with a silver.”

Van Dyk said he developed a stomach bug the night before the race, so his plan was to conserve as much energy as he could.

“I planned to sit back and just race a smart race and I stuck to it,” he said.

“The recliners (men’s individual H2 road race) were coming up on us and we reckoned it would take them two laps to pass us, but the commissaries stopped us.

“It possibly changed how the race would have developed later as it gave everybody a five minute rest before we got going again. It took another lap to get into it and that didn’t work very well for us.”

Van Dyk, who was born without legs, did not let the congenital birth defect deter him. The inspiring athlete won the Boston marathon nine times as a wheelchair racer, and the prestigious Laureus Award in 2006.

He was the first wheelchair racer to break the one hour 20 minute barrier in a marathon. His wife Suzanne gave birth after he had arrived in London, so he said it had been an emotional couple of weeks for him.

“It was a tremendous sacrifice for me to be here as I missed my daughter’s birth. It was really tough and emotional and to come out with a medal was really good. It was a very tactical race and there were times when it was excruciatingly slow.

“Then it was really fast, so the pace was up and down like a workout. With about two kilometres to go, I came to the front which is the best place to be when there is a dense pack like that.

“You might lose a spot in the sprint, but at least you’ll get a medal and that was my tactic. It was tough but it paid off, so I’m glad.”

Van Dyk said he was looking forward to being reunited with his wife and daughter Lexi, and meeting the latest addition to the family.

We live in a world where facts and fiction get blurred
In times of uncertainty you need journalism you can trust. For only R75 per month, you have access to a world of in-depth analyses, investigative journalism, top opinions and a range of features. Journalism strengthens democracy. Invest in the future today.
Subscribe to News24
Related Links
Tearful farewell for Du Toit
Van Dyk bags road race silver
Du Toit claims 100m silver
Next on Sport24
Fans applaud equal rewards

Choose your newsletters
Voting Booth
What are your views on the World Rugby men's Player of the Year nominations for 2021 not including any Springboks?
Please select an option Oops! Something went wrong, please try again later.
It's a disgrace! Both Siya Kolisi AND Eben Etzebeth should have been nominated!
39% - 5398 votes
Siya, at the very least, should have been included after a superb season
7% - 929 votes
Etzebeth has been SA's best player this year and should feel hard done by
20% - 2757 votes
Get over it! Moaning about this just sounds like sour grapes!
34% - 4612 votes
Previous Results
Showmax
The story of a legend: Sir Alex Ferguson