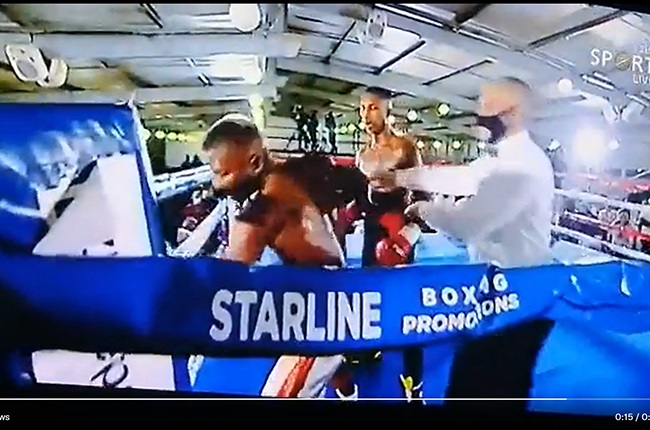 Lightweight boxer Simiso Buthelezi has been put into an induced coma at a Durban hospital after losing his bearings in a bout that took place in Durban on Sunday.

The 24-year-old Buthelezi was engaged in a 10-round World Boxing Federation All Africa Lightweight fight where he took what seemed like an innocuous left jab from his opponent, Siphesihle Mntungwa.

After referee Elroy Marshall separated the boxers, Buthelezi wandered off to another corner and looked like he was shadowboxing while his opponent stood behind him.

Marshall then stopped the fight, which then saw Mntungwa claim the title.

I was at the #boxing in KZN yesterday and this is one of the strangest and saddest things I've seen in the sport. Thoughts and prayers with Simiso Buthelezi who is now in an induced coma in hospital ???????? @SABC_Sport #SizenzaZonke pic.twitter.com/1097yFtKmY

Boxing South Africa's KwaZulu-Natal's provincial boxing manager Mike Dube said Buthelezi has had tests run on him by doctors at the King Edward VIII Hospital but said there wasn't a change to his condition.

"The doctors said they'll update us, but as per this conversation, he hasn't responded, nor has he said anything," Dube said.

His trainer Bheki Mngomezulu said the Zoology and Botany graduate from the University of Zululand didn't exhibit anything untoward during training and was tested before the fight.

"He's been in a coma from 23:00 yesterday, but there wasn't anything untoward in the fight and in training. He was leading the fight on points before the unfortunate incident occurred," Mngomezulu said.

"I really can't explain what happened to be honest. It was bewildering, but in his training and in the build-up to the fight, there was nothing untoward with regards to his condition.

"He was in good nick before the fight."

We live in a world where facts and fiction get blurred
In times of uncertainty you need journalism you can trust. For 14 free days, you can have access to a world of in-depth analyses, investigative journalism, top opinions and a range of features. Journalism strengthens democracy. Invest in the future today. Thereafter you will be billed R75 per month. You can cancel anytime and if you cancel within 14 days you won't be billed.
Subscribe to News24
Next on Sport24
Thomas, Fourie clinch SA Lawn Bowls Championship titles